Get Off My Lawn and Go Read a Book 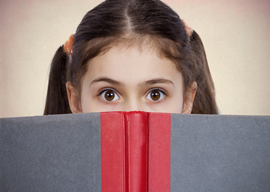 Being neither rocket-scientist material nor chipper by temperament, I have never been able to pile up the tower of steaming hubris it would take to convince myself that the world needs me to pass my genetic load of dyspeptic ire on to a child. So writing about the “young adult” genre of fiction may well be none of my business.

On the other hand, if I”m to live packed ever more tightly cheek by jowl with other people’s kids”if I”m forcibly taxed to fund their schooling and stints in juvie”I have the right to ask that the youngsters now in their teens be raised to be somewhat less of a feces-tossing mob of conformists than their immediate elders.

Damning a cop in a Missouri shit-hole without evidence might be human nature, sort of, but howling in chorus that only men can be jerks must be carefully taught. Today’s Twitter armies are prey to stampeding opinions because their faculties of rational thought, self-trust, and integrity were neglected as they approached the age of reason.

“”I can only imagine how much worse it is for teens today who want to be good girls. They must feel like utter pariahs.””

The schools may be hopeless, but books have always been a more intimate way to learn anyway; therefore I humbly suggest that access to smarter YA fiction might inspire impressionable minds to critique their peers and examine their own interior world.

For example, I wish Kia Heavey, the author of this year’s traditionalist teen romance Underlake, had been writing when I was a kid. Young adult fiction in the 1980s was so nauseously materialistic and factory-farmed that after a death in the family when I was 13, I decided it would be more comforting to turn to Albert Camus”which resulted in all the sleepless nights you might imagine. Adult fiction may be mentally stimulating for teens, but emotionally it’s over their heads.

These days, Heavey says, it’s even worse: mainstream YA authors have taken the snobbery and cruelty of 80s teen romance and piled mindless sluttiness on top of it.

“An especially egregious series aimed at teen girls these days is the Pretty Little Liars series”nasty, amoral high school girls who pivot merrily from getting high to having sex,” Heavey says. “When I was in high school, I was really demoralized by all these things. I can only imagine how much worse it is for teens today who want to be good girls. They must feel like utter pariahs.” Heavey herself turned to bass fishing and punk rock as a teenager; she wrote Underlake with her own daughter in mind, as inspiration for girls who don”t want to lose their sense of youthful magic and curiosity too soon.

Heavey’s young protagonist, NYC native Katie Welch, reminds me of a non-slapstick version of Saffron, the long-suffering, bookish daughter from Absolutely Fabulous. At the start of the book, Katie complains dutifully to her cool friends that her hip, drunk, fashion-editor mom is ruining her life by making her spend a summer in the backwater town of Underlake so they can fix up a property for a new tenant.

But after a couple of weeks of enforced rural tranquility and reflection, Katie starts to notice how she really feels. Trying to mimic her friends as they prematurely shed their innocence is not making her feel free or grown-up. Instead she’s being intellectually and emotionally squelched. When she starts to enjoy the friendship of the friendly, churchy, goofy young hicks of Underlake, it dawns on her that the lockstep progressivism of affluent city-dwellers is more conformist than the traditional values it mocks. And her city friends are losing a chance to develop their minds that they may never recoup.