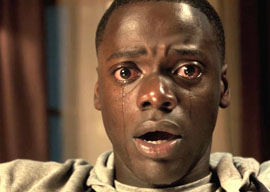 Daniel Kaluuya in Get Out

The 38-year-old Peele doesn”t appear in his Get Out. Instead, the protagonist is played by Ugandan-British actor Daniel Kaluuya, who told the Los Angeles Times:

“This film is how racism feels,” said Kaluuya. “You get paranoid and you can”t talk about it. You can”t voice it. No one around you gets it, so you can”t speak about it. And in the end it just comes out in a rage.”

Well, to be precise, that’s how antiwhite racist paranoia feels.

Kaluuya is best known previously for playing the enigmatic FBI agent in Denis Villeneuve’s adept 2015 Mexican border thriller Sicario. His abbreviated role appeared to have been left on the cutting-room floor, leading to speculation that his character was intended to turn out to be in the pay of the cartel. But do you dare portray a black bad guy today? (Sicario was politically incorrect enough about how waif FBI agent Emily Blunt was in over her head with all these tough guys.)

Kaluuya is, in truth, a creepy-looking actor most notable for his jet-black skin and bloodshot giant white eyeballs. He resembles a witch doctor in a 1950s safari movie. Kaluuya would be better off making a career out of playing villains because it takes much force of will for audiences to see him as the hero of a movie. But that’s what people mandate themselves to do nowadays to avoid being called racist.

Casting Kaluuya as the leading man may have been one of Peele’s passive-aggressive subliminal jokes. But the only overtly amusing lines in Get Out are given to Lil Rel Howery in the Anthony Anderson role as the funny fat friend who immediately recognizes that the protagonist’s discomfort is due to a vast white conspiracy against the black race.

Somebody should reboot The X-Files with a black cast investigating traditional black conspiracy theories about how the CIA is behind crack and AIDS. In the series finale, they would team up with Oprah to uncover the shadowy cabal behind all white racism: fashion designers Gloria Vanderbilt, Liz Claiborne, Tommy Hilfiger, and Michael Kors.

(In case you are wondering, here’s the reason so many blacks believe that various famous courtiers who are popular with blacks have gone on Oprah and, bizarrely, announced that they hate African-Americans: Young blacks like to go into department stores and try on clothes they can”t actually afford. But that would be embarrassing to admit, so when their friends tell them the clothes look fabulous on them and they should buy them, they need to make up an excuse fast. They improvise that…they”re boycotting the racist designer! Unfortunately, their pals fall for their stupid stories and spread them to other blacks around the country.)

But Get Out isn”t the comic masterpiece it could have been. Instead, it just encourages more lowbrow black resentment, which often doesn”t end well. Four years ago, I reviewed Quentin Tarantino’s Django Unchained antiwhite bloodbath movie and asked:

In 2013, is the black gun violence Tarantino espouses really such a fascinating new phenomenon? For generations now, American media have been encouraging blacks to take violent retribution. We”re coming up on close to a half-century of whites in the media egging on black badassery. How’s Tarantino’s macho minstrel show working out for black males, anyway?

Since Django, the media and Obama administration have turned the hate-white-men noise machine up to 11. But after a half century of liberal management of race relations, white people are adept at sidestepping black criminality, so most of the subsequent spike in homicide has been black-on-black killings. The big-city murder rate leaped a horrifying 27.7 percent from 2014 to 2016, which is a big reason the Democrats lost.

That’s more than 6,000 incremental dead bodies since Ferguson, most of them blacks murdered by blacks, which is a lot of blood on the hands of respectable people like Obama and Peele.