Give Me a Feisty Newt Over a Limp Mitt 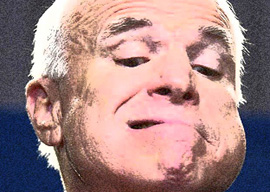 Which leaves Romney, whom many of us would very much like to see leave the field. His supporters include former Senator Bob Dole and former American John McCain, thereby ensuring Mitt has the failed-Republican-presidential-candidate bloc all sewn up.

Given his ardent support of Romney, one cannot pass over the traitor McCain too lightly. This treasonous man is the Sonny Liston of candidates. He took a dive last cycle and appears to be cheering for Mitt to do likewise.

McCain apologizes for plagiarists, only discovered the Mexican border after his crushing defeat, and seems to think living through an experience makes one a hero. It doesn’t. It only makes you a survivor. And that presumes Johnny Boy’s version of events is true, an account many who served in the same Vietnam prisons dispute vociferously.

All not to mention McCain’s betrayal of other servicemen who we knew (and he knew more than anyone else) were yet alive and being held as late as the early 1990s. McCain the Betrayer did nothing for those men. Nothing positive, anyway. Along with another failed presidential candidate John Kerry, McCain did everything in his considerable power to ensure those poor devils were abandoned to suffer and die forgotten in fetid jungles. So when McCain endorses someone, I know that candidate is as scummy as McCain.

Romney also has steely eyes, which I have never liked. Don’t glower at me, Mitt—shout at me. Hit me, even. But be a man about it.

Romney says he thinks Gingrich should be “sent to the moon” because of his proposal for a lunar base. Mitt evidently believes those billions should instead be poured into the savage sieves which are Detroit, Camden, Oakland, or East St. Louis.

Romney’s main problem as a candidate is his evident disdain for the vast swaths of the public he sees as lacking erudition. Do you think the technological advances of interplanetary endeavor outweigh the benefits of trying to “close the education gap,” empower the youths, or welcome the dead weight of anti-civilization? Well, you are obviously a moron. Mitt cannot simply disagree with you or argue his position; he must ridicule you.

He’s ridiculed Ron Paul numerous times. In more than one debate when Paul began making the points that personal liberties are imperiled and it was possibly none of America’s business which despot ruled the Middle East’s various dyspeptic regimes, our Romney made sure to give a big eye-roll to the audience. Mitt’s demeanor has been that Ron Paul is a senile old man we need to humor because he isn’t even worth debating. If you support Ron Paul (or merely some of the things he advocates) you aren’t simply wrong; you are stupid and crazy.

If for no other reason, I will throw all my support behind Gingrich. He may be wrong on many things. We may not be able to trust him on even the ones where he is correct. Yet he will take the fight to Obama. We already had an election where the Republican nominee failed to perform. Obama won that one. Given the choice of a limp Mitt who might win and a feisty Newt who won’t, I’ll take the latter.

We all know Gingrich isn’t perfect, but after McCain we ought to know it’s better to go down swinging.

Given the paucity of honesty, integrity, intelligence, and honor among leading Republicans, the American people will be far better off with a weakened but reigning Obama than a triumphant plutocracy.