Give Me Back My Holocaust! 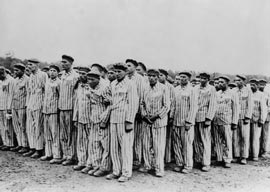 What has the world come to when a Jew can”t exploit the Holocaust? And not just any Jew, but the prime minister of Israel. Oy gevalt! As most of the world knows by now, Benjamin Netanyahu’s ham-fisted attempt to blame “Grand Mufti” Haj Amin al-Husseini for giving Hitler the idea to kill Jews rather than expel them landed with a louder thud than Chris Christie slipping on a banana peel. The backlash was so great that last weekend “Bibi,” the man who never backs down, backed down, issuing a retraction on his Facebook page (where he admirably avoided the urge to blame the mufti for the failure of Google+).

No question, Netanyahu was wrong on the facts. The killing of Russian Jews started immediately after the German invasion of Russia, and by the time the official Nazi order banning Jewish emigration was issued (Oct. 23, 1941″over a month before Hitler met with the mufti), it had been decided that all matters relating to the “evacuation” of Jews, from resettlement to murder, would take place in Germany’s newly acquired eastern territories. The mufti had nothing to do with that decision.

Netanyahu’s stumble is more important than it might seem. It demonstrates a (how I hate this term) “paradigm shift” in Holocaust exploitation, because at the same time that the right-wing Netanyahu failed in his goal to abuse Holocaust history in the service of present-day political concerns, left-wingers in Europe and North America were succeeding beyond their wildest dreams at doing the exact same thing. Leftists in Europe are misusing the Holocaust to flood Europe with “refugees,” and leftists in the U.S. are doing the same to prevent the mass deportation of illegal immigrants. These “progressives,” many of whom are not Jewish, are wielding the Holocaust with greater skill than the head of the Jewish state. And that’s just sad.

For a quarter century, I”ve been warning about “Holocaust sacredness,” the desire to turn the Holocaust into a quasi-religion, complete with state-sponsored anti-blasphemy laws. Whenever I attempt to argue against Holocaust sacredness, I”m inevitably called a “denier.” But this has nothing to do with denial. It doesn”t even have anything to do with revisionism. It’s merely about not turning an episode of human history into religious dogma.

“These “progressives,” many of whom are not Jewish, are wielding the Holocaust with greater skill than the head of the Jewish state. And that’s just sad.”

Initially, Holocaust sacredness was intended to be by Jews for Jews, a tool to maintain tribal identity and cohesion in a secular society (according to a recent Pew poll, 73% of all Jews believe that the single most essential thing about being Jewish is “remembering the Holocaust“) and a way to bolster Israeli nationalism. But something went wrong. In the pursuit of Holocaust sacredness, a new, universal version of Holocaust history was crafted, one that Jews hoped would give the rest of the world a personal stake in remembering the Holocaust and keeping it holy. Holocaust remembrance transformed into an all-encompassing, generic, universalist doctrine dedicated to “protecting the oppressed” worldwide from “bigotry, intolerance, and hate.” Giving the gentiles a share of the Holocaust may have seemed like a good idea at the time, but, as the Netanyahu fiasco demonstrates, the founders are rapidly losing control of the faith, as other groups of people”including some who are not overly fond of Jews”are using Holocaust icons and images for their own purposes.

Why do you think the Palestinian (and most of the Muslim) “intelligentsia” has never fully embraced Holocaust denial? The Muslim “street” is solidly denial-friendly, so you”d think denial would be an obvious go-to for any head-Muslim-in-charge. However, if there’s one thing a good Islamist can recognize, it’s an IED. “Respectable” Muslims have come to understand that weaponizing the Holocaust for their own purposes is a better strategy than pushing denial. That’s why even certain radical Muslims have joined Western leftists in using the Holocaust to force Europe to massively up its Muslim population. More and more, Muslims are realizing that Holocaust sacredness is a weakness in the West that can be exploited.

Sure, once the Muslim “street” moves from ISIS Avenue to Friedrichstrasse, denial will inevitably become the norm. But right now, canny Muslim strategists are happy to fake a belief in the God of Abraham (Foxman) for the sake of a more important goal.

As European leftists have been invoking the Holocaust to ensure that immigrants are let in, U.S. leftists have been doing the same to ensure that they are not kicked out. Former Massachusetts governor Deval Patrick claimed that the deportation of Mexicans is no different from sending Jews “to their deaths in Nazi concentration camps.” Sen. Patrick Leahy was even less subtle on the Senate floor when arguing against deportations: “Think of all those Jews that went to the ovens because we forgot our principles. Let’s not turn our backs now.” Sen. Dianne Feinstein made the same point in a New York Times interview. And keep in mind, the hysteria is only getting warmed up. Wait until mass deportation is proposed for real (if it ever is). Oh, optimistic conservatives, you think you”re ready for it. You think you”ll be able to fight the Holocaust rhetoric with common sense. You won”t be. And you can bet that the party is going to avoid the fight altogether. No GOP candidate wants to battle Holocaust imagery. No matter who is chosen for the GOP ticket, no matter which party controls Congress, there will be no mass deportations. The GOP doesn”t want to be on the wrong end of political ads showing trains going to Auschwitz as narrator Morgan Freeman solemnly pledges “Never Again.”

Conservatives are the ones who most need to stand up to Holocaust sacredness, and yet, paradoxically, they”re the ones who will be least able to do it, owing to something the always subtle Ann Coulter alluded to in a characteristically understated tweet (the one about the GOP pandering to “fucking Jews”). Only when conservatives allow themselves to understand that rejecting Holocaust sacredness is not the same as rejecting Israel or embracing Holocaust denial will they find the strength to stand up to what the left has in store should mass deportation ever actually find itself on the table. When I was “outed” as a revisionist, my friends in the GOP and the Tea Party had a perfect opportunity to say, “Wait a minute”we know that this Jewish Zionist neocon is not a Nazi. Let’s not give in to hysteria just because the Huffington Post, Gawker, and MSNBC call him a “denier.”” But they didn”t take that opportunity. That’s the strength of Holocaust sacredness. It’s stronger than common sense, stronger than personal friendship. It’s a mighty weapon and, unfortunately for conservatives, it’s in the wrong hands now.