Go Away Perez Hilton, and Take Your Purse With You 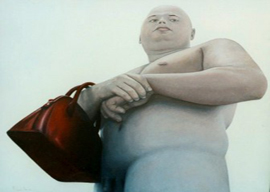 So you”re here and you”re queer. Get over it. You”ve made your point and shoved it down our throats repeatedly. Now, when are you going to grow up and shut up? I”ve had just about all I can take of the gay community’s loudmouth self promotion. I don”t want to be made to feel individually responsible for your troubles or your fight for civil rights. I certainly don”t wish to know if you pitch or catch. At this point, I have much bigger problems facing me. America is bankrupt, corrupt, and increasingly monopolized by dangerously idiotic legislation. But somehow a GLAAD spokesperson thinks he’s going to further gay rights or make the world care about a bitch fight on Twitter between a rapper and a fame whore by issuing a statement? Please.

Last week, Rich Ferrero, an intern for the Gay and Lesbian Alliance Against Defamation got involved in a Twitter war between the rapper 50 Cent and the gossipmonger Perez Hilton. Hilton probably orchestrated the stunt for publicity, but instead of ignoring the little snitch, GLAAD was manipulated. Apparently the rapper made some incendiary threats, which you can read about on Page Six. The rapper’s Tweet said, “Perez Hilton calld me douchebag so I had my homie shoot up a gay wedding. wasnt his but still made me feel better.” None of this sounds particularly serious or malicious to me, but clearly Rich Ferraro thought otherwise. He issued a statement saying, “It’s wrong to make jokes and promote violence against the gay community.” Um, while I agree that violence is wrong, men are often violent, including gay men. So this doesn”t come out of nowhere. I”m sure a few fruity kids still get beat up in the locker room and some queer-hating rednecks let off steam in the wrong direction on occasion. Nevertheless, the majority has become pretty accepting of homosexuals. Even those dingbats that oppose gay marriage don”t physically beat up gays very often.

Proclamations like those made by Rich Ferrero make people think homosexuals are a bunch of nagging babies who love to play victim. People like Perez Hilton make gays look really pathetic.

This Rich Ferraro person sounds like a big dunce who ought to be demoted for listening to anything Perez Hilton has to say. As far as I know, no one relating to this Tweet got “shot up.” Okay, thanks for reminding us not to beat up gays, Rich. I think most of us have that under control at this point. I doubt 50 Cent’s semi-literate tweet is inciting a lot of violence against gays. Furthermore, to suggest that making jokes is wrong is totally obtuse. If it really is wrong to make jokes about gays, then it must be wrong to make jokes about any community. Right, Rich? And by this reasoning, then humor must be altogether wrong. I want to know why a statement wasn”t issued regarding the misuse of the word douche bag? Maybe Rich Ferraro has forgotten he’s gay. Homosexuals are amongst the funniest people on earth. Actually, they are so good at poking fun, they can border on “wrong” themselves. But that’s not the point is it? The point is that without humor we are up to our ears in doodoo. Humor is the best way to diffuse an argument, and deal with name-calling. I think I have to side with 50 Cent on this one, pal.