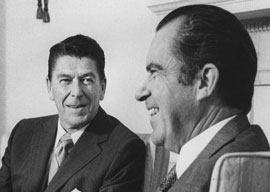 “History does not repeat itself, but it does rhyme.”

Mark Twain’s insight comes to mind as one observes the panic of Beltway Republicans over the latest polls in the battle of Obamacare.

According to Gallup, approval of the Republican Party has sunk 10 points in two weeks to 28 percent, an all-time low. In the Wall Street Journal/NBC poll, approval of the GOP has fallen to 24 percent.

In the campaign to persuade America of their Big Lie—that the House Republicans shut down the government—the White House and its media chorus appear to have won this round.

Yet, the truth is the Republicans House has voted three times to keep open and to fund every agency, department and program of the U.S. government, except for Obamacare.

And they voted to kill that monstrosity but once.

“The people who fought the battle of Obamacare will be proven right to have fought it, and America will come to see this.”

Republicans should refuse to raise the white flag and insist on an honorable avenue of retreat.

And if Harry Reid’s Senate demands the GOP end the sequester on federal spending, or be blamed for a debt default, the party should, Samson-like, bring down the roof of the temple on everybody’s head.

This is an honorable battle lost, not a war.

Why, after all, did Republicans stand up? Because they believe Obamacare is an abomination, a new entitlement program this nation, lurching toward bankruptcy, cannot afford.

It is imposing increases in health care premiums on millions of Americans, disrupting doctor-patient relationships and forcing businesses to cut workers back to 29 hours a week. Even Democratic Sen. Max Baucus has predicted a coming “train wreck.”

Now if the Republican Party believes this, what choice did the House have except to fight to defund or postpone it, against all odds, and tune out the whining of the “We-can’t-win!” Republican establishment?

And if Republicans are paralyzed by polls produced by this three-week skirmish, they should reread the history of the party and the movement to which they profess to belong.

In the early 1960s, when the postwar right rose to challenge JFK with Mr. Conservative, events and actions conspired to put Barry Goldwater in the worst hole of a Republican nominee in history.

Kennedy was murdered in Dallas one year before the election. Goldwater had glibly hinted he would privatize Social Security, sell the Tennessee Valley Authority and “lob one into the men’s room at the Kremlin.”

After his defeat of Nelson Rockefeller in the California primary assured his nomination, Goldwater was 59 points behind LBJ—77-18.

The Republican liberals—Govs. Rockefeller, George Romney and William Scranton—to the cheers of the Washington press, began to attack Goldwater for “extremism” and failing to vote for the Civil Rights Act of 1964.