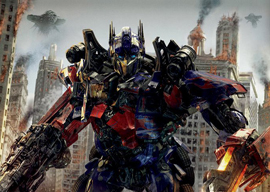 What’s our side? Humanity, America, the US military…they’re all pretty much the same thing in a little kid’s mind (as they would be, functionally, during an actual alien invasion).

The Transformers movies celebrate American imperial muscle. As teenagers grow more diverse, their longings for order have grown more militaristic, more authoritarian. The attitude of today’s youth toward 1960s liberals is more or less: “Your revolution is over, Mr. Lebowski. Condolences. The bums lost.” They are impressed instead by extremely well-organized institutions such as SEAL Team Six and Michael Bay movie sets.

Transformers extols the military-movie complex. Thus, the US commandos trying to retake Chicago (don’t ask) fly in over Navy Pier on those V-22 Ospreys that are the Pentagon’s own version of Transformers. Since the helicopter failures during Jimmy Carter’s Iran hostage rescue attempt, the military has spent $27 billion trying to get these tilt-rotor hybrid aircraft that take off vertically like a helicopter but then morph into airplanes to finally work right.

Not surprisingly, the bad robots shoot down the fragile Ospreys. But in what might be the most insane stunt I’ve ever seen, the paratroopers leap out of the doomed Ospreys over downtown Chicago wearing wingsuits—a European-invented form of mental illness in which fabric between the limbs provides a three-to-one glide ratio—and skim like flying squirrels at 85MPH between the skyscrapers. Retiring mayor Richie Daley must have been totally gaga by last summer to let five stuntmen jump off the 1450-foot Willis Tower and plummet around his Loop. Too bad that they can’t flash on the screen: “This is not CGI. These lunatics really did this.”

From my reductionist standpoint, Transformers: Dark of the Moon has the perfect plot to sum up: Good robots fight bad robots.

You may wonder why the robots fight. I don’t. They fight for reasons that no doubt were explained at great length in the first two movies and need not concern us here.