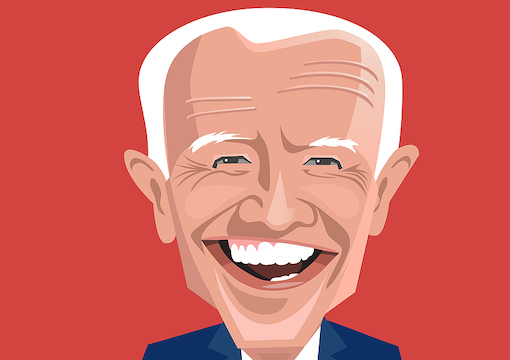 Last Thursday, President Joe Biden was allowed out of his protective bubble to deliver a nationally televised address to the nation. This was big news in Washington, as Biden has been in hiding since taking office. Normally a new president spends his first few weeks in office making the rounds, chatting with the media, and doing what amounts to a victory lap around Washington. Biden has not done any of that.

Even though the American media is stuffed to the gills with toadies and rumpswabs, there is always the chance one of them accidentally asks him a real question. Worse yet, there is the chance he tries to answer. For a man in severe cognitive decline, even simple questions can lead to embarrassing moments. That is why it was big news that he was going to give a live speech to the nation.

The stated reason for the address was to inform the public about the party’s heroic effort to fight the Covid panic. The real reason, of course, was to prove that Biden was not already dead. He shuffled out to the podium like a sad old man in a nursing home and mumbled through a mostly incoherent speech. It was a good reminder that in his prime, Joe Biden was a glib dunce. Now he is no longer glib.

The absurdity of the performance was amusing, but it was also sad. This man should be at home playing with his grandchildren, whose names he never remembers. Instead, he is being forced to play President, while minions from the inner party push through the great reset. It is a disgusting and vulgar display that should never be allowed to happen, but it really does capture the state of the political class.

Biden is not the only geezer shuffling around the halls of power. The Speaker of the House is an octogenarian, Nancy Pelosi, who, like Joe Biden, struggles to handle simple conversations with the media. A lifetime of day drinking has not helped. The Senate Majority Leader is a relative youngster at 70 years old. Mitch McConnell, the GOP leader, just turned 79 this past February.

America is a gerontocracy now. Look around the political space and it is geezers as far as the eye can see. According to the Congressional Research Service, the average age for House members is 58 years old and the average age for the Senate is 63 years old. The bureaucracy is also old. Since no one ever quits or gets fired, government workers stay until death. A third of them are senior citizens now. We are governed by geezers.

One reason the political class looks like a museum exhibit is the voters are a bunch of geezers too. Older people tend to vote in greater numbers than younger people, and we now have a lot of old people. The baby boomers are all in various stages of decrepitude now. The Woodstock Generation is in their late 60s, while the Disco Generation is late 50s. Boomers are the largest voting bloc by far.

Boomers, of course, were never going to age gracefully. The generation that gave us the youth culture cannot come to terms with being old. When they hit middle age, they convinced themselves that 40 was the new 25. When they hit their 50s, they got the little blue pill so they could pretend 50 was the new 30. Now that they are senior citizens, they vote for octogenarians, because 80 is the new 60.

Another reason America is now ruled by geezers is America stopped being a growth business a long time ago. When a business is small and growing, it draws in young ambitious people. Young people need an opportunity, and in a growing enterprise, there are chances to make a name for yourself. Great fortunes are made at the start of a boom and great names are made at the beginning of an empire.

Once the enterprise matures and stops growing, it begins to shed the young, creative, and ambitious. Those young whippersnappers with their new ideas and energy are a threat to the people in power, so they have to go. That is what happened with the American empire toward the end of the Cold War. The collapse of communism meant the end of history and the end of America’s growth phase.

The Soviet Union went through the same process. After the war, the man at the top was in his 60s, a senior man leading a young confident party. After Stalin and the reform efforts that came after him, the Soviet Union became a static, conservative state. It was no longer a growth enterprise promising to conquer the world. By the end, the party leadership looked a lot like the current American leadership.

Like the old Soviet Union, current-year America is now a highly conservative state, despite the proliferation of bizarre social fads. The range of acceptable discussion has narrowed to the limited number of things permitted by those geezers at the top of the system making the rules. Anything that questions their authority is forcefully denounced, because old people lack the confidence to defend themselves or their ideas.

Of course, when the boomers die off, that brings the gerontocracy to a close. The millions of brown people they imported to assuage their guilt will take over. That is what makes the Biden-Harris administration so perfect. Like Joe Biden, the boomers will stick around too long, stagger around in a fog at the end, then leave their descendants to the tender mercies of the nonwhites who will take over.

The natural end of life is never a dignified thing. This is true whether it is the life of a man or the life of a nation. That is what Joe Biden represents. His shuffling around the stage, struggling to remember his name, is a metaphor for the age. He represents the final undignified end of an aging political class sitting atop a dying empire. The only question now is whether he and what he represents go peacefully.