Ross Douthat and Reihan Salam have won near universal acclaim for their book, Grand New Party (albeit not from the editors of Taki’s Magazine“see here, here, and here). I trust, therefore, that they will not take umbrage at my criticisms, of which this will be the first of two installments.

First, what is more of a complaint than a criticism, Grand New Party has no footnotes and cites authorities only sporadically. (As Steve Sailer has noted, the authors seem to have adopted several of his ideas. Can you blame them? Sailer comes up with more original insights in a week than most journalists do in a lifetime.) Not every book has to come with footnotes. But Grand New Party purports explain how different voters behave, how different policies affect them, and how different policies affect how different voters behave. On page after page, the authors make controversial claims about how the world works, oftentimes without telling us how they acquired this knowledge. For all one can tell, Grand New Party‘s policy ideas have no more to recommend them than the authors’ skill in fitting them into a coherent narrative.

Second, Douthat and Salam never address the most obvious flaw in their argument, namely, that helping (or trying to help) a given group of voters does not necessarily mean that they will vote for you. For the one to follow from the other, voters must recognize which policies are helping them in the first place”which in turn requires an almost preposterous level of political sophistication.

To reduce the cost of health insurance, for example, Douthat and Salam advocate establishing a program of federal reinsurance and limiting the tax deduction for employer-provided health insurance. Whatever the merits of these proposals, voters are unlikely even to know about them, much less understand, evaluate, and correctly identify them with one party or the other. Indeed, if Republicans sought to limit the tax deduction for employer-provided insurance, one can easily imagine the Democrats successfully demonizing Republicans for trying to take away voters’ health insurance.

As it happens, Douthat and Salam provide their own evidence that, when it comes to appealing to this or that segment of the electorate, policy does not matter. Richard Nixon, they write, enforced the very busing policies the working class hated, dramatically expanded the civil rights bureaucracy and ramped up spending for Great Society welfare programs. Despite his liberal record, Nixon maintained his popularity with the working class through symbolic opposition to the counter-cultural left.

As this example shows, what actually wins working class voters (or any type of voter, for that matter) is not a party’s policies but its brand. Voter ignorance ensures a wide measure of policymaking autonomy. What politicians do with that autonomy is up to them. In the meantime, it is wrong to assume that a candidate or party’s policy positions play a large role in voter behavior.

Douthat and Salam appear to acknowledge this point in a recent essay on National Review Online, but not, as far as I can tell, in Grand New Party itself.  In the book, they sometimes seem to be advocating a working-class-based strategy more for moral than for strategic reasons.

Fourth, Douthat and Salam”like many young conservative writers these days”have gone Tocqueville-wacky. By the first chapter they are warning that the “great danger of modern life is atomization and isolation,” praising “America’s distinctive cultural habits,” and crediting our “mediating institutions” with saving us from “totalizing ideologies” invented by “countless moderns.” “Culture,” they continue, “provided the sense of solidarity and the moral guardrails necessary to sustain a society where the common man is independent of both state power and the dubious protections of noblesse oblige.” The proper goal of public policy is to promote “private virtue.”

Douthat and Salam don’t actually need any of this hefty sociology to make their arguments. At no point later in the book do the authors suggest that any of the policies they recommend (or all of them together) will not just create healthy incentives but will also give rise to self-sustaining and virtuous habits. Neither Douthat nor Salam, nor, I daresay, anybody else, actually knows a reliable mechanism whereby government policies can inculcate a given set of cultural traits or folkways. A felicitous set of folkways”such as, say, those that the Anglo-Americans brought to this continent”is just that, felicitous.

Although Douthat and Salam profess at the outset that “wise public policy promotes both virtue and security,” in the end they do not actually believe that the policies of the Republican Party can create a healthy culture. 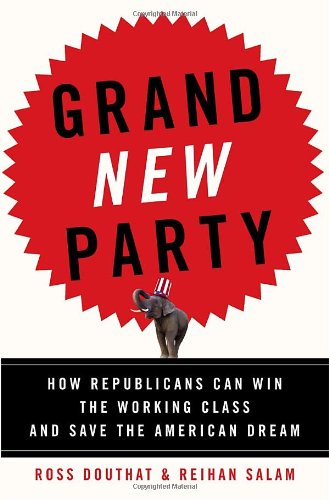 Nevertheless, to the extent that the authors regard their discussion of “modern life,” “mediating institutions” and the like as essential background, it ought not to pass without comment. Most of it is unconvincing. Consider:

“¢ The authors contrast “atomization and isolation” with “order” of the kind that is either imposed “from above” or that swells up “from below.”  But “atomization””assuming that such a thing exists to begin with”does not conflict with “order.” On the contrary, a perfectly atomized society would be also be perfectly orderly, for by definition atomized individuals could not form factions or coalitions to compete for power and resources. Indeed, a strong case can be made that the societies that sociologists might describe as “atomized””say, Scandinavian countries, where family and religious life as they were once known seem to have disappeared, or Singapore, where the regime strongly discourages ethnic and religious loyalties”are also the most orderly.

“¢ In any case, it seems rather quaint in a multicultural world to warn against the “great danger” of “isolation and atomization.” Day by day, whether they like it or not, Americans of different backgrounds are feeling their ancestral attachments more and more keenly. Americans who never saw themselves as “hyphenated” are now regularly categorized by ethnic group. The potential consequences are ominous. If any sociological phenomenon is dangerous today, it would seem to be our accelerating retreat from “isolation and atomization.”

“¢ Douthat and Salam hold modern “isolation and atomization” responsible for inspiring “totalizing ideologies” such as communism and fascism. But actual totalitarians do not exhibit a strong fear of isolation and atomization.  On the contrary, radicals such as Marx have despised such “mediating institutions” as the family or the church. Perhaps Douthat and Salam meant to say that without strong mediating institutions, a society becomes vulnerable to totalizing ideologies.  While this idea has a semi-respectable pedigree, it ought not be accepted blindly.  Totalitarian movements, once in power, may seek to liquidate competing sources of authority, but that does not mean that a plurality of sources of authority prevents totalitarian movements from coming into power in the first place. On the contrary, competing authorities may weaken the state’s legitimacy and leave it vulnerable to overthrow.

“¢ In any case, the very idea that there is now or ever was a tendency towards “atomization” is dubious. It may have looked that way to Tocqueville, who observed in America a widely dispersed population of independent farmers. (I myself strongly suspect that he simply mistook the particular folkways of the Anglo-Americans for some universal set of “modern” institutions.) But in point of actual fact, modern men have associations galore, many of which were previously unimaginable. As human beings’ coalitional psychology is written into their DNA, the sociologists’ belief in “atomization” is almost unsupportable as a scientific matter. Tocqueville argued that Americans “solved” the problem of atomization by creating voluntary institutions. But it would be more accurate to say that Americans’ genius for voluntary institutions”as opposed to institutions into which one is happily or unhappily born”followed naturally from their relative lack of tribalism and ancestral loyalties. Because Americans did not feel so keenly the accidents of birth, they formed a remarkably high-trust society where voluntary associations flourished.  From this perspective, “atomization” is the friend rather than the enemy of a healthy culture.

“¢ Douthat and Salam write that “intense sense of national solidarity” is “necessary to sustain a society” and “create economic security and independence.”  If by “cultural solidarity,” they mean nationalism, then insofar as “mediating institutions” often get in the way of nationalism by creating oppositional loyalties, the authors may embrace one or the other but not both (or at least embrace only those “mediating institutions” that are compatible with American nationalism). If they instead mean something like “a high sense of social trust,” then it is likely that what the authors call “isolation and atomization” is one of the preconditions of Americans’ ability to trust total strangers. Show me a place where individuals are intensely attached to their clans, their homelands, or their ancestral ways of life, and I will show you a place not of “cultural solidarity” but of violent antagonisms.

Concededly, what seems most to trouble Douthat and Salam is the breakdown of the nuclear family. But then their pontifications on how “countless moderns” have fought “atomization and isolation” are not only unnecessary but contradicts their point.

Finally, Douthat and Salam neither defend nor stick to a consistent theory of what motivates voters. Do voters vote for their class interests? Their ethnic interests? Their self-interest? Is the candidate for whom one votes a kind of status symbol that has nothing to do with anyone’s interests at all?  As I will discuss in a later post, Douthat and Salam appeal (but without saying so) to each of these theories as their occasion suits.  The result is at best an impressionistic picture of how voters actually behave.