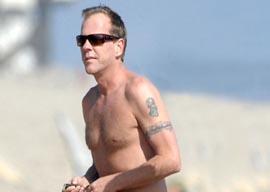 New York’s in a tizzy over Fashion Week, and the crowning event, a smorgasbord of socialites and celebrities, fashion designers and their fans, will take over the city Friday for Fashion’s Night Out. One well-dressed gent who may want to avoid the limelight: Project Runway‘s Tim Gunn. In his new book he spills the beans on seeing Vogue editrix Anna Wintour being carried down a stairway by her bodyguards so she could avoid the elevator. “Nuclear Wintour,” as she’s dubbed, was none too pleased by the story, a product her people say comes from Gunn’s “vivid imagination.” Gunn says he expects “hell to freeze over” if they cross paths Friday night.

Ms. Wintour does, however, have niceties to say about other people. She praised Naomi Campbell as “a professional and a joy to work with” during Tuesday’s massive Fashion’s Night Out runway show. The remark seemed to be unsolicited but a source claimed the supermodel demanded to be on an upcoming Vogue cover in exchange for sashaying down the catwalk.

Attention single men of the world: Halle Berry is not going to date you. After breaking up with the high-cheekboned, blue-eyed model Gabriel Aubry, Berry is rebounding with her current co-star, Olivier Martinez. The new couple is shooting their film Dark Tide in Paris and were spotting holding hands and kissing in the street. It’s a little too adorable.

Here’s a lesson: Next time you buy a first-class seat, make sure you buy your dog one, too. Minka Kelly of Friday Night Lights fame and girlfriend-of-the-moment to Derek Jeter apparently threw a fit on a cross-country Delta flight when she was asked to move her dog’s carrier from under her seat. She thought her manager had arranged for Chewie, her five-year-old cockapoo, to accompany her in first-class, but she ended up moving back to coach for takeoff and landing. One early report said she called the Yankees shortstop so he could convince the flight attendants, but she’s refuted that rumor.

Has Kiefer Sutherland fallen off the wagon again? He was spotted “swaying, bobbing, and weaving” outside of a bar in the Meatpacking District earlier this week around 4 a.m. Or maybe he was just practicing for a new role?

Britney Spears is in hot water this week. Her former bodyguard lodged a sexual harassment claim again the pop star, saying he was “humiliated and traumatized” after she repeatedly exposed herself and “engaged in numerous sexual acts” in front of him. Fernando Flores was hired in February, so should the complaints be true, it seems Spears isn’t quite fully recovered from her crazy phase. 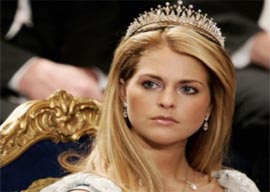 Consider this the fastest ascension to pop superstardom ever. Willow Smith, the nine-year-old daughter of Will Smith and Jada Pinkett Smith, released her first single “Whip My Hair” earlier this week, and Jay-Z signed her to a record deal just a few days later. “It’s rare to find an artist with such innate talent and creativity at such a young age,” he said. Willow’s shooting her first music video later this month. Again, let us repeat, she is nine years old.

Michaele Smith has more enemies than fans—and you can include her mother-in-law in that list. The alleged White House gatecrasher and current D.C. housewife has settled a lawsuit against her mother-in-law for $14,000. Thanksgiving will be a little awkward around the Salahi household, no?

Has Princess Madeleine found love—or at least a little bit of fun—again? After she broke off her engagement with that cheater Jonas Bergstrom earlier this year, the blond beauty has been staying under the radar—until now. At Prince Nikolaos and Tatiana Blatnik’s wedding weeks ago, she met Stavros Niarchos and the two apparently hit it off. Stavros is notoriously into blondes—he once dated Paris Hilton and Lindsay Lohan. We’re curious to see if this flirtation will last. 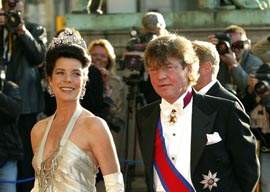 Another royal is also hitting the scene with someone new: Princess Caroline was seen out with London gallerist Gerard Faggionato, despite the palace never confirming her split with husband Prince Ernst August of Hanover. He’s not crying over spilt milk—the prince has also been seen out with other women.

Another day, another Harry and Chelsy rumor. But could this one actually hold water? Prince Harry‘s longtime girlfriend Chelsy Davy is moving to South Africa this week (she’s from Zimbabwe) and is reportedly telling friends “We’re finished. This is a new beginning for me. I want to start my career in South Africa where I plan to spend the rest of my life. I don’t want to live in Britain.” They haven’t been seen together in public since May.