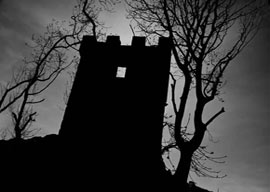 As the leftist juggernaut blithely steamrollers its way over what’s left of this country, its blinkered acolytes have smugly convinced themselves that they are on “the right side of history” and that any dissenters are troglodytic throwbacks to a less moral and less enlightened era. They freely smear, degrade, disgrace, tut-tut, pooh-pooh, pee-pee, and skeet-skeet anyone who questions whether their shallow tokens of “cultural progress” might be nothing more than cynical window dressing that obscures an increasingly “empowered” governmental behemoth.

Although their chapped and cracked lips speak of “equality,” they truly see nothing as equal and can”t help but view all of history in terms of skin color, gender, sexuality, and especially ideology. Anyone who disagrees with their resolutely intolerant collectivist notions is far less than equal and is viewed instead as a soon-to-be-obsolete subhuman fossil. They can never get over their oft-despised cultural “other,” and the other is never their brother.

“History is cyclical rather than linear, and there’s no “right side” of a circle.”

Despite the historical record, a peskily persistent fallacy is argumentum ad populum, the idea that the majority is right. The mob, no matter where it’s headed, whom it’s beheading, or what it’s burning down, has always deemed itself to be on the right side of history. So whenever I hear some smug, smirking, smarm-coated snarkmonster bleating that they are on “the right side of history,” what I hear is, “I feel safe within the crowd.” I don”t sense that they fear being on the “wrong” side of history so much as they”re afraid of being on the “losing” side. They don”t want to be on the wrong side of superior force. Many of them exhibit the shallow and neurotic herd-animal fear of being deemed uncool or out of step. In far too many cases, being “on the right side of history” amounts to nothing more than being trendy. Many of these types used to ally themselves with alleged “oppressed minorities,” but now that they appear to be on the “right side of history,” they openly mock the newly marginalized minorities. Once the victims of bullying, they now fear being on the wrong side of peer pressure and are the world’s neo-bullies. Others are the type who wait until there’s critical mass behind any social movement before joining it. Many of them have no core and will fellate power wherever it leads them and consider themselves bold for doing so. And at least as it concerns liberal white males, I”ve never seen people so eager to surrender to the very historical forces that seem destined to march right over their necks.

Modern triumphalist progressives share a common delusion that history is a linear process wherein societies continually perfect themselves morally. Yet I doubt many of them, if given access to a time machine, would be bold enough to travel back and lecture their now-cherished “Native Americans” that they were on the wrong side of history as the white man was rolling westward over them. I don”t think they”d have the chutzpah to stroll onto a slave ship during the Middle Passage from Africa and tell the shivering, huddled, shackled slaves-to-be that they were on the wrong side of history. I don’t think they”re toting sufficiently sized cojones to have accompanied the conquistadores as they slew the Aztecs. Compared to the Dark Ages, the Roman Empire was on the wrong side of history, but I”d bet that most modern progtards would have opted for the safety of togas and aqueducts over the grim barbarism that succeeded it.