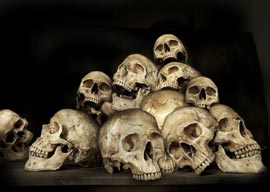 In most cases, repression against revisionists and deniers has been carried out through the courts (and in Canada and Australia, via “human rights commissions”).

Is it deplorable? Entirely. It’s foul. It’s execrable. It needs to end. But let’s not forget that the Jewish groups that rammed through those laws did so under the laws of the various European nations they targeted, exploiting free speech weaknesses in mealy-mouthed, pussified leftist nations.

On the other hand, Muslim “defenders of the faith” in Europe just like killing. Heads cut off, throats slit, bodies riddled with bullets. The Theo van Gogh murder, the Toulouse and Montauban shootings, the Jewish Museum shooting in Belgium, the attempted ax attack on Danish cartoonist Kurt Westergaard, the attempted assassination of Swedish cartoonist Lars Vilks, the Stockholm bombings, and last week’s Charlie Hebdo massacre. No subtlety, just brutality.

Now, a leftist would almost certainly counter that European Muslims respond with violence because they”re speaking “the language of the disenfranchised” (c”mon, admit it, leftists, you were just thinking that). And that’s bullshit. Jews also have a pretty long history of being disenfranchised in Europe. The difference is, what Jewish organizations have brought about in Europe with anti-revisionism laws took patience. Today’s radical Muslims don”t know the meaning of that word. They”re nihilistic and childishly impetuous. Sure, they could use the “anti-hate” laws that Jewish groups labored so long and hard to infest Europe with, but that would take time. On the other hand, “Ooh, look, a machete! I can use that right now!”

Recalling Konrad Heiden and Hans Fritzsche, and the comparison between Soviet and Western brutality during the postwar years, we might suggest that the Jewish method of silencing enemies mirrors the Soviet style (reward and punishment), and the Muslim method emulates the Western style (blunt, savage violence). And regarding Fritzsche’s point about hope versus fear, the Jewish method offers “hope.” You can always throw yourself on the mercy of the court, or plead insanity, or”as I did to get the JDL off my back”recant. Hell, there’s even genuine hope, in a legal sense; Ernst ZÃ¼ndel’s two Canadian convictions in the 80s were overturned by the courts. But everyone in Europe who’s “blasphemed” Mohammed knows that by the time you see Ali Kaboom standing over your bed with an ax or a gun, close your eyes and think of ponies, because you”re finished.

So in the end, which is more dangerous?

Ernst ZÃ¼ndel underwent what can only be described as psychological torture during his odyssey of imprisonment in Canada and Germany. Germar Rudolf is back in the U.S. after his imprisonment in Germany, but he missed his child’s formative years. On the other hand, the murdered employees at Charlie Hebdo will never see, hear, read, or write anything again, or spend another moment with their loved ones.

It’s a toss-up. Do you want your mind scrambled, or your skull crushed? Times like this, I say: I”m grateful to be in the U.S., where my punishment these days comes in the form of editors in the mainstream press killing reviews of my book, no one wanting to employ me, and only a sparse few of my old friends wanting to hang out with me. The book thing ticks me off, and the “not earning an income” thing is irksome, but being left alone by false friends? It has its charms.