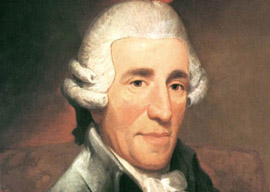 Every year Joseph Haydn comes for a few days to the town in which I live when I”m in England. For about five days there are two concerts daily, and for me it is a great luxury to have a string quartet playing almost on my doorstep. I am fond of Haydn’s chamber music.

But there is no disguising the fact that the little festival to celebrate the life and works of Papa Haydn has a definite atmosphere of its own, not so much fin de siÃ¨cle as fin de civilisation. Although I am myself a pensioner, I am usually by far the youngest member of the audience; the prevalence of walking sticks and other aids in the audience is very high.

I appreciate that not everyone is at leisure to attend lunchtime recitals, though that does not explain the absence of middle-aged people and younger in the evening; and admittedly the tickets are not cheap. But neither does that explain the absence of a single young person in the audience. If there were some star of popular music at twice the price, the difficulty would be in keeping them out rather than in attracting them in; the money would be no object.

There was something strange and unusual about the audience that I noticed: It concentrated intensely and without difficulty. It did not feel that terrible itch that seems to affect most people nowadays”the need to be distracted from whatever they are doing by something else, as if that something else were to bring them a satisfaction that their present activity does not. Where stimulation is constant, boredom inevitably results, and it is unassuageable. For those accustomed to constant stimulation, boredom is built into the very fabric of the universe, as it were, or even of being itself.

“I felt not only relief but triumph! Tension is delightful when it ceases. “

In one of the concerts, however, I realized that I was myself half-modern. In the middle of a string quartet I happened to look downwards in the direction of my breast pocket and there, to my horror, saw the red light of my telephone winking at me. I thought I had left this instrument of the devil at home, but evidently I was mistaken and had not. I think I must have blushed.

Horror of horrors, I knew the phone was not switched on to silence and that it might ring at any time. Phones going off at inappropriate moments”during a funeral, say”are always an embarrassment and an annoyance, but a ringtone in the middle of a string quartet! What could be worse? Imagine the scene!

The quartet would stop playing, of course. The first violin, a man of great distinction as both performer and teacher, would lay down his instrument (of Haydn’s period, naturally), climb down from the stage, and approach me angrily. What would he say, very loudly for the public to hear? Had I no respect for Haydn, his music, the players, the audience? Philistine, barbarian, lout! And then, having relieved his feelings, he would lead the quartet off the stage in protest, not to return.

The audience would turn on me, and rightly so. I could offer no defense. They would raise their sticks and walking frames to me”though, being gentle and cultivated, they would not actually use them to beat me (besides, they would fall over). I had ruined their day, if not their week. I would slink away in shame and not show my face until Haydn had departed the town.

What to do about the infernal apparatus in my pocket? I did not want to take it out while the music was still playing, thereby drawing attention to myself as a member of the younger generation who could not concentrate without distracting himself for longer than a few minutes. (No one else in the audience, I felt sure, had even brought a phone with him.) The shame would have been terrible. On the other hand, I feared some footling call asking me whether I wanted to participate in a government scheme to put an electricity-generating windmill in every garden, thereby saving the planet at only fifty percent of the original cost to myself. How do they get your telephone number, I wondered, from what monstrous database? What a terrible job it must be to telephone people to ask them to buy things they don”t want!