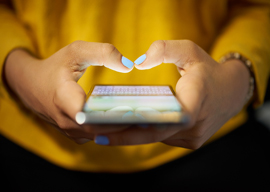 I am so sick of David Hogg, the pompadorable Parkland school shooting “survivor” and media-darling gun control activist. And I feel an intense need to publicly say just how sick I am of this kid, because, apparently, criticism of David Hogg has been added to the left’s ever-expanding list of “hate speech.” Seriously, I haven’t seen such a wall of protection around a teenager since that bubble boy from the ’70s. My problem with Hogg isn’t even about guns per se. I’m totally a Second Amendment advocate, but it’s never been my go-to issue. During my days as a GOP organizer, I’d meet guys who were so into their guns, they’d carry photos of their arsenal in their wallet, like pictures of children. And I gotta confess, those dudes creeped me out. Mind you, I support their right to be creepy, but it’s just not my scene. My beef with David Hogg, aside from the fact that he’s become the American Muhammad in terms of “ridicule is verboten,” is that he exemplifies everything I despise about the “postmillennial” generation. Having grown up in a culture that worships victimhood, Hogg is playing the survivor role with such gusto that, were Elie Wiesel still alive, he’d be green with envy.

Hogg was attending Marjory Stoneman Douglas High School (along with 3,100 other students) on the day that former student Nikolas Cruz shot seventeen people. Sure, everyone at the school that day can technically be considered a “survivor” in that, in theory, Cruz might have crossed paths with any one of them during his rampage. But Hogg and his fellow “survivors” are claiming a moral authority that goes far beyond what their level of suffering merits. And they’re using that moral authority as a club against Americans who hold opinions that differ from their own. Hogg claims that anyone who opposes his gun control agenda either doesn’t care about dead kids or somehow wants to see more of them. And while fanatical absolutists have been with us since the dawn of man, Hogg represents a uniquely postmillennial variety—a crusader for the “online generation.” Even while under lockdown in his classroom, the kid was already recording YouTube videos about the experience, coaching his fellow “survivors” in their testimony in order to ensure maximum emotional impact (and views).

“Criticism of David Hogg has been added to the left’s ever-expanding list of ‘hate speech.’”

Hogg’s actions and behavior have led to a plethora of nutty conspiracy theories about how he must be a (here we go again) “crisis actor” or a paid CIA stooge or even an adult masquerading as a teen. In previous columns, I’ve devoted more space to “false flaggots” than they deserve, so I won’t waste too much time on them here. But it’s worth pointing out that one of the reasons the David Hogg conspiracy theories have gained so much traction is that the false-flag crowd is aging and out of touch. What they see as suspicious, I see as completely in character for an American kid of Hogg’s generation. Recording a mini-doc while cowering in a locked-down classroom? Every member of the online generation wants to be a filmmaker. These selfie-obsessed brats carry with them, in their precious cell phones, cameras that, in terms of picture quality, put to shame the expensive analog video equipment I had to rely on for my documentaries back in the 1990s. And these kids don’t even need an editing bay; they have built-in video editing systems, too.

It’s totally not suspicious for a kid like Hogg to pull out his phone to exploit the massacre even as he was “surviving” it. Every kid these days wants to be the next big YouTube star.

And then there are the candid shots, Hogg and his crusadin’ pals smiling it up in between talk shows and press appearances. Surely this proves they’re just a bunch of paid shills. I mean, who could smile, who could joke, after so many friends had been brutally slaughtered? Today’s teens, that’s who. Once again, the conspiracy loons show how out of touch they are. Teens have always been callous and indifferent to suffering that doesn’t directly affect them. A school bus full of peers goes off a cliff? Dude, that sucks. What’s for dinner, Mom? But getting dumped by a boyfriend or girlfriend? The world has come to an end! Pass the sleeping pills, I cannot bear the pain! Modern teens have always been that way; self-centered and indifferent to the fate of others. But this is the WorldStarHipHop generation we’re talking about here. They’ve taken teen indifference to masterful new levels. They spend hours upon hours howling with laughter at videos of people being beaten to a pulp, stabbed, and murdered. There is nothing at all suspicious about members of the online generation yukking it up following a tragedy. This is the most desensitized group of kids in modern history.

Plus, expecting Hogg to be forever dour is to fall for his “worst victim ever” routine. He didn’t actually get shot at. No one was gunned down in front of him. He spent the killing spree locked in a classroom solidifying his plan to be the next Michael Moore. Don’t expect him to act like a combat veteran with PTSD…because that’s exactly how he wants you to see him.

The lunatic chatter of the conspiracy cretins is especially annoying in this instance, because the “crisis actor” crap distracts people from seeing Hogg for what he actually is: a perfect product of his time, the hero his generation deserves. Media-savvy, technologically adept, self-involved, opportunistic, expert at putting on the face the camera demands (super serious for the news, smiley for the selfie), blindly convinced of the correctness of “his truth” and dismissive of anyone who disagrees, and able to play the fearless knight in armor (“I will not be silenced! I am an ADULT! I am loud, proud, and a warrior for my cause”) when it suits him, and the delicate, waifish shrinking violet (“Oh my heavens, I have been insulted on Twitter! I’m just a poor helpless child. Won’t some manly savior kindly ban that horrible man’s account?”) when that’s what the situation calls for. He is the left’s ideal of the noble victim (sure, he’s a white male, but that can be forgiven because guns!). His Twitter feed is nothing more than empty talking points, the same stock accusation mindlessly leveled at anyone he dislikes (“you’re owned by the NRA!”), and bizarrely contradictory claims (NRA members hundreds of miles from the school are to blame for the shooting, but the cop who failed to confront the gunman at the school is blameless; there’d be fewer mass shootings if weapons were in the hands of the police, but we shouldn’t expect the cops to confront mass shooters).

Hogg can recite talking points like a pro. He’s got the lines, the look, and the furrowed brow down pat, so without doubt he has a bright future in the mainstream media, as evidenced by his appearance, along with fellow Parkland “survivor” Cameron Kasky, on Real Time With Bill Maher a few nights ago. Hogg and Kasky, who’ve launched a gun control organization called Never Again (must they continue to poke poor old Elie Wiesel’s envious corpse?), hit their marks perfectly. “The politicians work for us, they need to put country before party, we have to think of the children, dear God won’t someone think of the children?” etc., etc. Kasky even implied that he had been “on the receiving end of an AR-15” even though he, like Hogg, rode out the shooting tucked away in a locked-down classroom.