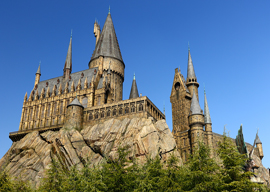 American academia markets itself as progressive if not downright radical. For example, here’s a self-description by an assistant professor of Critical Identity Studies at Beloit College:

She intervenes in popular visual media like reality television to interrogate how time moves and for whom to catalog desire and identification as taxonomy and type. Her preferred gender pronouns are she/her.

Since the downfall of the Gestapo, nobody has treasured the verb “interrogate” as much as postmodern academics.

The Hitlerian vocabulary of Studies professors suggests that although we hear so much about the dangers of the “alt-right,” we ought to learn more about the “ctrl-left.”

The counterpart to all this policing of others” expressions for the crime of offending one’s amour propre is self-obsession. The deadpan Twitter account New Real Peer Review passes on screenshots of actual published academic articles. A particularly comic genre is “autoethnography,” in which “researchers” tell their readers (if any) how they feel about things, such as:

This is an autoethnography about the role of nail salons in relation to my own evolving feminist and femme consciousness. Through a story of desire, grief, isolation, and recuperation, I explore the ways that the development of my sexual and gender identities relies on women’s intimacy within and across lines of commodification, race, class, and sexuality. In so doing, I attempt to reconcile my desire for high femme signifiers with working-class, anti-racist, and anti-colonialist solidarity, to articulate what I term a FemmeNist consciousness.

I think this means she’s a lesbian but she likes getting her nails done at salons staffed by poor Vietnamese ladies.

“In truth, higher-education institutions are less often engines of social change than they are preservers of class privilege.”

And yet, aren”t colleges just about the most antiquarian institutions in our culture? Perhaps their strenuous leftism is actually a facade to mask the desire of faculty, administrators, and students to extend their time-honored privileges?

If we weren”t so often lectured on how universities represent progress, diversity, and the future, you might almost imagine they tend to be islands of stasis, conformity, and the past. And, contrary to all the rhetoric about the horribleness of the American past, humans rather enjoy tradition. Thus, parents will pay a quarter of a million dollars so their children can enjoy four years on a campus built to look like Downton Abbey.

Ironically, during this era of hate and violence on America’s campuses, they have never been more opulently landscaped nor more luxuriously outfitted with amenities. A distant relative of mine is in the business of equipping college campuses with elaborate swimming-pool complexes. She visits the most expensive hotels in the world, and then replicates their facilities at state flagship universities.

Despite her best efforts to make old State U. look like a Dubai resort, student activists on her campus denounce the microaggressions they claim to endure and complain that the paradisiacal campus isn”t a safe space.

Yet few seem to be in any hurry to leave. The most strident vitriol spewed about the horrors of their campus climate comes from those most passionate about obtaining a paid sinecure at the university as a diversity commissar.

Competition is fierce among student activists to become a professional diversicrat and thus never have to exit. Early this year at Berkeley, for example, one social justice jihadi (who demanded to be known by the pronoun “they“) stabbed a female gender-studies major who had outhustled him for media attention at a rally he had organized against sexual violence.

I have to admit They has a point about not wanting to have to leave. Universities are at the still point of a turning world. When I was a child in the 1960s, the two most famous colleges were Harvard and Yale. They were the Pan Am and TWA, the Kodak and Polaroid, the Woolworth and Montgomery Ward of education.

Indeed, they”ve been that for a remarkably long time for American institutions: Yale dates to 1701 and Harvard to 1636.

The other two most famous universities in the world today are likely Cambridge, which was founded in 1201, and Oxford, whose origins are lost in the mists of time (a date of 1096 is sometimes suggested).

Up through the 1920s, Americans started up a huge number of private colleges. But after the Depression and WWII, the opportunity to reach the top tier shrunk dramatically. American Jews, for instance, built themselves many hospitals and country clubs but only a handful of their own colleges (such as Brandeis), preferring instead to win admission to the hallowed halls of the Ivy League.

It appears close to impossible anymore to build a prestigious college from scratch the way that, say, JetBlue has grown to be the sixth-biggest airline since its first flight in 2000. The youngest university on the U.S. News & World Report‘s top 50 national-universities list is UC Irvine, which is 52 years old.

You might think that small liberal-arts colleges would be easier to start up, but No. 1 on the USNWR list is Williams College from the 18th century, while No. 4 Middlebury dates from 1800. The names of the most prestigious liberal-arts colleges haven”t changed much since the days when fraternity boys wore raccoon coats and drove Stutz Bearcats.

Americans like their colleges old. And so do the upwardly striving millions of Asia, who flock to the most famous old American universities.

In truth, higher-education institutions are less often engines of social change than they are preservers of class privilege. They are country clubs with textbooks.