Hooked on a High Jumper 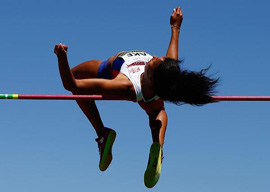 Okay, sports fans, the Games are over, Uncle Sam and Britain hit pay dirt, and the prettiest girl of the Olympics was Morgan Lake, a black Brit high jumper who wins the gold medal for looks and proper demeanor.

Here’s a tip for ambitious mothers: Take a lesson from Morgan Lake—the name is perfect, no agent could have made it up—and instead of sending your daughters to Hollywood, where they’re more likely to end up as high-class hookers, you should guide them toward athletics and the high jump. Morgan Lake is café au lait, with a perfect body and a very sweet, innocent face. She didn’t place but was in the finals, having jumped over one meter ninety-four. I know nothing about her except that she’s 19, and what I saw of her on the TV screen.

What was that Noël Coward song about putting your daughter on the stage? If she looks like Morgan, let her be a high jumper—so eat your heart out, Jessica Raine (remember her? I’m over her). Why is it that grace and innocence make my knees go weak? I suppose it is because I have a view of the fairer sex more common in an era more romantic than the present. I feel more alive in the presence of beauty, but I also feel longing, both spiritual and physical. But beauty has been downgraded these past 50 years. Beautiful buildings are no longer built, just ugly, modern, so-called utilitarian ones, and I’m not sure about the last one. Boats are now extremely ungraceful and downright unshapely; they either look like insects or refrigerators on steroids. Once upon a time there was nothing more elegant or beautiful than sailing boats with overhangs on their bows and sterns. Now we have titanium trimarans that can do 50 knots and look like prehistoric ants. If you need to do 50, get a boat with an engine.

“Why is it that grace and innocence make my knees go weak?”

Fashion is another industry that vies mightily for the ugly. Gracelessness is the order of the day. Horrors like the Kardashians revel in eyesore fashion because it attracts the paparazzi and hides their unattractiveness. Loveliness, however, needs no additional paraphernalia. Morgan Lake jumping in a simple bikini-like suit is the perfect example.

“Why is it that beauty is no longer the standard we judge things by?” asked a female friend of mine as I was writing this column. (She and her sister were the two prettiest girls in Paris 40 years ago.) I told her why: Beauty is elitist, carried off by a few, and we now live in the age of the common and vulgar. Beauty is an optimistic thing, and we now have all become pessimists. Beauty means great inequality, and that’s the real no-no of our times. We are supposed to all be equal now, at least that’s what the crooks who rule us and make these ludicrous laws try to force us to believe.

But we are not. The busybodies think they can cure the ills of an unequal society by keeping the smart ones back. That’s an old trick that was tried with comprehensive schools and ended in utter failure. I know it would take a heart of stone to criticize the fact that the poor Syrian butterfly-stroke girl was allowed to compete in a special heat of very slow swimmers—which she won—but it is part of the same scheme: enforced equality.

No wonder opinion-makers loathe beauty, it is as unequal as it gets. Beauty does not need to promote itself over others, it’s too self-evident. The incendiary appeal of victimhood—all those Olympians crying that they’ve been cheated of victory—does not apply to beauty. The disaffected cry, the beautiful ones float on gossamer wings. Beauty meets the needs of the soul, ugliness the needs of our inhibitions.

And I forgot about ugly art. The sanctification of Picasso, not to mention the grotesque Lucian Freud, are perfect examples of visual ugliness triumphing over the sublime art of Leonardo, Rembrandt, Sargent, and Degas. It is what Paul Johnson called fashion art, as opposed to fine art. Art is now a species of hucksterism, no ifs or buts about it. Critics now judge art not on aesthetics but on whether it advances a progressive political agenda. When I see the crap that sells for hundreds of millions I really want to shout. But my shouts are drowned out by atonal music, or any music after 1960, if you know what I mean.

But back to Morgan Lake and the Olympics. She competed and did not win, which was the purpose of the Games to begin with—to take part. And that was better than purchasing athletes like Qatar and Bahrain did, and even Turkey. Poor Greece, with no help from it’s broke government, won six medals, three of them gold. Qatar and Bahrain paid for foreigners to compete under their ludicrous flags and won two medals between them. Qatar and Bahrain are ugly places ruled by ugly people who think they can buy beauty. They cannot. Just because a lot of greedy Brits sold their beautiful old houses to them, the two sandy hellholes thought they could also buy Olympic glory. Most athletes are professionals nowadays, so they figured it would be easy. For once the good guys won. The hellholes will remain hellholes without Olympic glory, at least for another four years. That’s good enough for me.