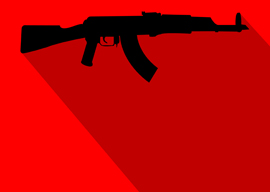 So Michel Houellebecq quit promoting his new book. Instead he’s hiding out somewhere in the provinces.

Houellebecq, whose name I despise having to spell, is the French satirical novelist who was featured on the last Charlie Hebdo cover before the January 7th deluge of Islamist blood-whining. I have no inside information as to whether he retreated from the capital out of writerly dramatics, or real fear for his life; the news reports are cagey and I am not, alas, a personal acquaintance of the dour genius who was dragged into court in 2002 for calling Islam the stupidest of all religions.

Houellebecq lost a friend in the Charlie Hebdo shooting, and he is famously indifferent to the safety of his neck and liver, so perhaps he’s more in mourning than in hiding”or it could be that the possibility of a Kalashnikov nudging him in the temple for his blasphemies against the unpleasant prophet is suddenly not so abstract.

The book, Soumission (Submission), as you”ve likely heard, is a near-future piece of political sci-fi in which the French government is hijacked by Islamists, with the aid of the left.

Soumission was released eerily close in time to the Charlie Hebdo massacre; I say “eerily” because the book is predictive of the events that surrounded its release. In one scene, for instance, a cocktail party full of academics is interrupted by the sound of gunfire and the sight of flames springing up from near the Place de Clichy, but no one is really scared; their minds can”t quite grasp the idea that such violence could make the leap from the occupied suburbs to the heart of the capital. Here in the real world, the French establishment in the press and government seem incapable of taking in the violence of the situation; they”re more worried about scary words, like islamophobie, and “comic” DieudonnÃ© M”Bala M”Bala’s retardedly unfunny antisemitism.

“Primitive religions are more frank about this than the religions of the book”but submission to the godshead in human myth is, at the historical root of it, sexual, libidinous, or at least euphoric; and among religions in modern vogue, none is more explosively kinky than Islam.”

In an apparent prescience over which he had a bit more control, Houellebecq’s stand-in and protagonist, a literature professor, also flees Paris, as the violence surrounding the elections turns the entire country into a temporary ghost town. (It’s safe to conjecture that the author had already spent some time considering the possibility that his big fat mouth was going to get him exiled to the provinces, like a champagne-raddled Ovid.) Though the word islamophobie has been trotted out to describe the book with nauseous, endless predictability, the scare tactics used by Houellebecq’s fictional Muslims are creepily similar to what is currently happening in France. Fear is not a mental illness when the tiger is actually in your bedroom.

But these are not Soumission‘s most interesting, nor its saddest, predictions.

For all the political trappings of the book”regardless of whether you believe Houellebecq goes too hard on Islam or too easy”political animals are not the heart of the work. They are only important in that they threaten the essential human endeavor: literature.

(Indeed, whenever Houellebecq gets too serious about political details, the narrative bogs down considerably. Compared to the mathematical computations and personality cults of electoral machination, the protagonist’s regrets at seeing his Jewish girlfriend flee for Israel are far more”how you say?”sexy. Although his wistful parting shot at her, political though it be, breaks your heart for the French: “There is no Israel for me.”)

The narrative begins with an elegy to a dour French genius of another era: the 19th-century functionary and writer Joris-Karl Huysmans, whose books were the subject of the protagonist’s doctoral dissertation. With Huysmans as the vehicle, the first few chapters open into an elegy to the secular French literary canon as a whole. In particular, Houellebecq pays tribute to the personal element in Western fiction”more precisely, to the use of the writer’s own idiosyncratic mind as the heart and soul of a work of literary art.

The special quality of our literature”the greatest art of a West which is ending as we watch”is not hard to define … only literature can give you that sensation of contact with another human mind, with the entirety of of that mind, its weaknesses and its greatness … only literature can give you contact with the minds of the dead, in a way that’s more direct, more complete, and more profound than you get even in conversation with a friend … a writer is above all a human being, present in his books.

I”ve been railing for longer than I”d like to think against the increasingly self-obsessed tendencies in American diary fiction”which has been marauding under the egomaniacal misnomer of “literary fiction” for some 40 years now. But although Soumission may not change anybody’s mind about radical Islam one way or another, it’s succeeded in making me rethink my own attitude toward the personal in fiction.

The first chapters of Soumission illuminate the vast gulf that exists between self-centered tripe Ã  la Dave Eggers or Lena Dunham and the sense of the presence of a mind that Houellebecq is talking about in the passage above. It’s what’s missing from both Islamist scripture-based ranting and”ironically”the sort of “intensely personal,” superficially confessional Western writing that focuses almost entirely on animal feelsies and bodily functions. The sense of personal communion with a dead man’s mind is, as Houellebecq’s protagonist senses, the intangible treasure that has made French secular (and Catholic) literature an incomparable cultural store. And the mindlessness of Islam becomes, in the framework of the book, the worldly threat to such spiritual pleasures.

Houellebecq pays tribute to Huysmans in other ways, cleverly foreshadowing his own treatment of his controversial subject by calling out Huysmans” sense of humor:

As AndrÃ© Breton justly remarked, Huysmans” sense of humor is a unique example of generosity; it lets the reader take the first swing, giving the reader advance permission to make fun of the author, of the excesses of his whiny descriptions, be they horrible or laughable.

Later in the book, when Houellebecq knocks his own, similar jokes out of the park, this foreshadowing makes it all the sweeter, like Babe Ruth calling his home runs.