How Do You Solve a Problem Like a MAGA Part II: Tard Harder 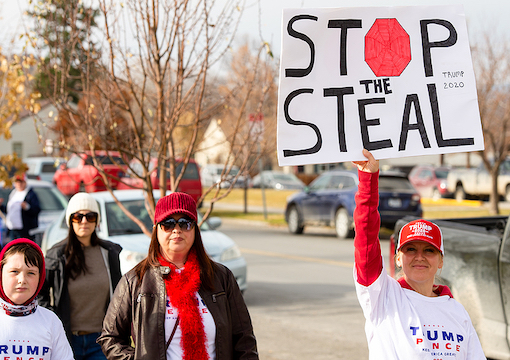 There are two courses of action that MAGAs can take in the wake of the debacle that was 1/6: learn from one of the worst strategic disasters in American political history, or, conversely, don’t learn a damn thing. Because what’s a mistake if not something to deny and repeat?

That’s the choice: be less tarded, or tard harder.

We knew—we all knew—what the left wanted to happen. At no point did leftists try to hide their endgame. For the past few years, they ceaselessly sowed anxiety about “What if Trump doesn’t respect the election results?” and “What if Trump refuses to leave office?” and “What if MAGAs riot should Trump lose?” It was crystal clear that this was exactly what the left was hoping for; those “what-ifs” were anticipatory.

And the QAnon MAGAs, who fancy themselves expert sleuths who can detect what they call “predictive programming” (“The Simpsons primed us for 9/11!” “Captain America primed us for Covid!”), completely missed a real-life example. The left was banking on not just a November win but a Trump/MAGA refusal to accept it, and the QAnon MAGAs walked right into the trap.

They literally told you what they wanted you to do, and you did it. And you did it on a level that went beyond their wildest expectations.

Okay, damage done. Can’t turn back time (Cher tried it once, and look at the state of her now). All that matters is what happens from this point on.

From my days as David Stein the mainstream GOP politico to my years penning this column, I’ve cautioned again and again about the right’s susceptibility to wacky fairy tales about false flags and sooper-secret plots and plotters. And my friends would say to me, “What harm does it do? Okay, maybe rightists are prone to nonsensical flights of conspiratorial fancy, but it ain’t harmin’ nothin’.”

“For the record, any response to the ‘steal’ would have been better than the one-two punch of losing the Senate and storming the Capitol.”

Anyone still believe that? An intricate web of lunatic bullshit from Lin Wood, Sydney Powell, QAnon, rightist “influencers,” and Trump himself prompted a bunch of idiots to storm the Capitol and sully the America First brand for years to come.

My advice about the danger of nutty conspiracy theories having been validated, I’m gonna dispense some more. Here are Dave’s five tips for being a less tarded MAGA.

Tip No. 1: Be discerning. The alternative press is no more reliable than the mainstream press. Thirty years ago, when I was part of the Willis Carto/Spotlight circle, I’d marvel at how Carto’s crew would just make shit up to fill pages and garner subscriptions and donations. I saw it firsthand. Don’t trust CNN, NBC, or The New York Times. But also don’t trust www.PatriotFreeMAGAPress.biz or www.TruthFreedomNews.us.

None are more easily gulled than those who believe they’ve found the singular source of truth. Rightists get repeatedly played because many of them have a childish faith in anything that comes from nonmainstream sources (“the hidden truth!”). The real truth? Everyone’s lying to you to some degree, everyone’s playing you for something. Be skeptical all around. That goes for CNN, that goes for Breitbart, that goes for 8kun.

Tip No. 2: Don’t seek refuge in comforting illusions. A bunch of lies brought MAGA to where it is now. The lie of a vast international vote-stealing octopus, the lie that Mike Pence would or could flip the election, the lie that 1/6 could’ve possibly resulted in Trump being declared the victor. Some of you will be tempted to import new lies to soothe the burn from the old ones. For example, the lie that 1/6 was the work of Antifa or BLM. Yes, an apparently anti-Trump black dude named John Sullivan was arrested for taking part in the Capitol incursion. This has birthed a popular myth that Sullivan “led” the incursion in the company of a CNN reporter. That’s simply false. There was no “CNN reporter”; Sullivan was accompanied by a leftist “Native American Jewish” freelance journalist named Jade Sacker. But more to the point, the criminal complaint against Sullivan makes it clear that he wasn’t “leading” jack shit. He followed the MAGAs and certainly seemed pumped about what they were doing. But he was just a guy on his own, him and Sacajewea.

At most, Sullivan is the leftist version of Patrick Howley, the right-wing fake-news purveyor (formerly of the Daily Caller, American Spectator, and Big League Politics) who infiltrated the Occupy Wall Street loons in 2011 and led the charge to storm the National Air and Space Museum while disguised as a lefty (he ended up being the only one to actually breach security and infiltrate the museum, chiding the leftists for not having the balls to follow his lead).

That one rightist infiltrated a left-wing protest in order to move it toward violence doesn’t make the protest itself “rightist.” And Sullivan wasn’t nearly as proactive as Howley, who actually did direct the course of an event.

So don’t hide behind Sullivan. The responsibility for the storming lies with the thousands who made it happen, not the one or two outsiders who tagged along.

That’s if Sullivan was even an outsider. Back in November, Seattle Antifa put out a warning about him as a MAGA infiltrator. Indeed, Sullivan’s brother is a proud MAGA who’s garnered much publicity in the past few weeks. There’s a decent chance that both Sullivans are trolls who are playing everyone for lulz.

Tip No. 3 applies to those on the flip side of “It wuz Antifa.” These are the MAGAs who proudly embrace the Capitol storming because “they dun stoled the election, they dun erased our votes, so what was left for us but to become revolooshunarees?”

So say the people who helped purposely depress the Georgia runoff GOP turnout. Nobody “stoled” that vote; you blew that one yourselves by listening to Lin Wood.

Nixon made a comeback. Trump will not. Case closed.

And for the record, any response to the “steal” would have been better than the one-two punch of losing the Senate and storming the Capitol.

Tip No. 4: “Whataboutism” isn’t gonna save you on this one. Yes, the left riots too. Yes, BLM and Antifa caused way more destruction throughout 2020 than MAGA did on 1/6. But there’s a difference, one that some of you shoulda considered before going on your big D.C. adventure. Race riots have been a fixture in the U.S. forever. As with sports championship riots, the public has become slightly desensitized to them.

Storming the U.S. Capitol with the intent of overturning an election had no precedent. MAGAs want to act like motive doesn’t matter in terms of the “double standard” (“Hey—why are we getting judged harsher than them?”). Well, motive does matter, and an unsuccessful aktion can sometimes have even worse repercussions than a successful one.

You guys do realize that Guy Fawkes and his coconspirators failed, right? You know that they didn’t actually do the thing they were planning to do. But the British government made a shitload of hay from a failed attempt to force regime change. I’m not comparing the Gunpowder Plot to the Capitol incursion. I’m pointing out that “but we failed” is never insurance against your stupid-ass plot being immortalized by your foes.

Yes, 1/6 is being judged more harshly than BLM riots, because the motive was extraordinary. Americans are used to ghetto thugs banging pots and screaming, “We wants juztiss ’n’ shit.” Americans have seen Seattle 1999 and Occupy 2011 and it’s understood that every decade a new group of idiot kids will try to dare another Kent State. But MAGAs stormed the Capitol with the declared intent of overturning an election and possibly executing the fucking VP. That’s unique.

That they failed, that they never had a chance of succeeding, that many of the stormers are pathetic man-children, is beside the point. It’s the “play stupid games” meme. An extraordinary plot inevitably brings extraordinary repercussions. Don’t pout when the opposition takes your stated intentions seriously…expect it. I’m not defending the double standard; I’m saying that it’s the inevitable outcome. The stormers’ own rhetoric gave the left an angle, and the left is running with it.

Funny enough, the only way the MAGAs can defend Trump during his upcoming impeachment trial is to admit that the Capitol attack was preplanned and not the result of spur-of-the-moment incitement of a hyped-up crowd. That gets Trump off the hook (in terms of the impeachment charge), but it also hammers home why the incursion was psychologically rattling to many Americans. The “preplanned” aspect makes it far more Guy Fawksian than if it had simply been a bunch of rowdies gettin’ their blood up and making an impulsive decision.

“Trumpism without Trump” won’t work if you don’t let go of the man, and letting go of the man will be easier if you’re honest with yourself about the man.

Let’s revisit Patrick Howley, our faux Occupy vandal. To his credit, Howley doesn’t put the Capitol storming on Antifa. Being a faker himself, he knows it when he sees it, and he knows that the 1/6 rioters were bona fide MAGAs. And he’s proud of that. I doubt there’s a more vocal defender of the Capitol storming on Twitter; he’s as rabid a pro-Trump insurrectionist as you’ll find.

In a Jan. 14 tweet, Howley explained why it’s so important to him to keep fighting for his god-king. He posted a photo of the man, with the caption “Remember what they took from us.”

Never forget what we lost because of the “steal.” This is why the fight must go on, by any means necessary!

The photo Howley chose as the defining “what they took from us” pic?

Trump standing in front of tables of fast food.

Not Trump standing in front of a completed border wall. Not Trump signing foundational changes to our immigration system into law. Not Trump supervising the ICE buses for “deportations day one.”

Nope. It’s a photo of smirking Trump and a room full of McDonald’s.

This is what they took from you. This is what justified an asinine act of political violence. Yes, Trump was a fun little troll…who swiftly abandoned his agenda once he saw that people like Howley were sated by the trolling in the absence of accomplishments.

Get over the man and get over yourselves.

Or at the very least, if you want to keep digging that hole, dig far away from the rest of us.