How Can We Get Rid of Puerto Rico? 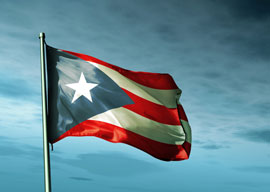 Is a baseball mitt a toy? How about a trampoline? Is a goose a farm animal or a wild animal? Is chess-playing an art or a science? Do I shelve a novel about China with my fiction books or my China books?

These are problems of categorization. Each of us approaches the matter differently. “Hard” categorizers insist that everything should go into one bucket or another, while “soft” categorizers are more tolerant of ambiguity, more willing to leave objects in some fuzzy middle ground.

A clever political scientist has shown that persons of a politically conservative inclination are more likely to be “hard” categorizers. That’s me, and that’s why thinking about Puerto Rico drives me crazy.

I mean, what is the place? Is it a country, a state, a colony, or what? “A commonwealth,” is the official answer. What’s that?

As an ex-Brit, I can tell you all about commonwealths. Britain has one: the British Commonwealth. After the dear old British Empire was wound up in the mid-20th century, important people thought it would be a bit anticlimactic if nothing at all replaced it, so they invented the Commonwealth of Nations, a sort of club for all the countries that had once been British colonies (not counting those dreadful Yanks, of course).

“Plainly the USA should get rid of this millstone. That’s easier said than done, though.”

Matter of fact, Monday this week was Commonwealth Day. The Royal Family went to church. That’s what they do”they have a day. There are also Commonwealth Games and conferences and such. It’s fun if you”re one of the elite types who gets to attend these things. It can also be a bit fraught, though: Colorful Ugandan dictator Idi Amin staged his coup while the elected president was away at a Commonwealth conference.

I can”t see how Puerto Rico relates to any of that. Are there any other places in its commonwealth? Apparently not: It’s a commonwealth of one.

Puerto Rico is a case of soft categorization, that’s what it is. It used to be a good old-fashioned colony of Spain back in the days when civilized nations weren”t ashamed to have colonies. The USA acquired it in 1898 by the Treaty of Paris that ended the Spanish-American War.

A succession of American military men ran the place for a couple of years, starting with Brigadier General Guy Henry, a leathery old Puritan who, according to one historian, thought the Puerto Ricans “had acquired very liberally the Spanish habit of lying and cannot be trusted.” Then Congress got around to dealing with the issue, making Puerto Rico a sort-of territory under a governor, but with its own House of Representatives.

In 1917 Congress passed the Jones Act, giving US citizenship to all Puerto Ricans. Folklore says, and Puerto Ricans believe, that Woodrow Wilson wanted Puerto Ricans as soldiers to beef up his army for World War I, which the USA entered a few weeks later.

In fact, the logic was preemptive. Germany was thought to have designs on the Danish West Indies next door to Puerto Rico, threatening approaches to the Panama Canal, and there was strong sentiment in the territory itself for independence. (The Puerto Rican House voted unanimously against US citizenship, to no avail.)

After some arm-twisting, Denmark sold their islands to the USA. The islanders became US citizens, their territories the US Virgin Islands, and the Jones Act followed to sweep Puerto Rico along with the local trend.