How Many Rappers Must Get Shot Before People Stop Shooting Rappers? 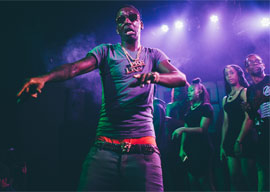 In 2002, a 6’6” rapper named Big Lurch was arrested by police while “naked, covered in blood, standing in the middle of the street, and staring at the sky.” He later claimed to have been high on PCP. Human flesh was found in his stomach. Lurch was convicted of murdering a girl named Tynishia Ysais, whose lungs had been found torn from her chest.

In 2003, a rapper named Corey Miller—whose stage name was C-Murder—was convicted in the beating and fatal shooting of a fan. Lurch’s label, Black Market Records, also featured an artist named X-Raided—who continued making records from jail after being convicted for a 1992 murder.

Civil-rights icon Michael Brown—the “Gentle Giant” of Ferguson who was killed after strong-arming a grocery-store owner and then fighting over a cop for his gun, leading to months of pointless rioting—was also an aspiring rapper whose lyrics boasted of his propensity for murder and his desire to put “whites on the bottom.”

Kori Muhammad—arrested earlier this year for a Fresno shooting rampage where whites were apparently targeted for their skin color and in which three white men died—is on camera laughing about white extinction. He, too, was an aspiring rapper who took delight in the idea that all the grafted white devil skunks would soon be murdered.

It is probably a safe bet to assume that every last rapper mentioned here—whether they’re shooters or shooting victims—is morally outraged at the pervasively popular yet statistically fraudulent myth that white cops are randomly slaughtering innocent young black males for sport in the streets of America.

A long time ago, rapper Chuck D of Public Enemy said that hip-hop was “black America’s CNN.” That’s true in the sense that hip-hop is peddling a fake narrative—when it comes to who’s actually a mortal danger to rappers, white cops probably don’t even crack the Top 10. Statistically—as is the case with the black community at large—the biggest danger to rappers is other rappers.