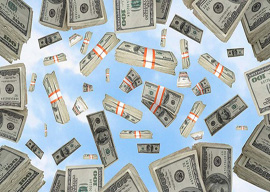 In the United States the Powerball lottery has topped $550 million. Far too often unexpected wealth of such magnitude has been witness to tragedy. Thus here are some useful tips concerning the more common mistakes to avoid becoming another lottery-winner calamity.

Shortly after the good news of your win, there will be some very bad news and it is best to brace yourself now”you didn”t actually win $500+ million dollars. You are merely a joint champion along with Powerball officials and the taxman. Estimates vary, but typically one should be advised to expect less than half the total. No, it isn”t fair. Then again, you just won the average lifetime earnings of 192 men with only a high-school education or 68 lifetime wages of the best lawyers and physicians. So stop complaining.

All right, now here you are with roughly $250 million. What to do? Better put, what shouldn”t you do?

Starting with the first press conference, do not say you will “give to charity” and especially do not say how much you might give. This presents various problems: the very real possibility of it being legally binding if you are too specific; the fact that every other charity on Earth will hound you the moment you step off the dais; and the mistake of thinking this act makes you look as if you”re beneficent rather than an ass.

“It is often remarked that money changes people. This is a canard. Rather, money merely augments their natural tendencies.”

Real charity isn”t done for grandstanding. It’s nameless and you don”t tell anyone once you”ve done it. If in need of some perspective, visit the local cemetery; it’s crowded with self-aggrandizing monuments to people of whom you”ve never heard. You want to be truly magnanimous? Shut your darn mouth as you write the check.

Moreover, think long and hard about where your wealth is going. Everyone reading this knows at least a half-dozen people wanting for money. More woes in this world are borne by those desperate for $100 than the ones needing $1 million. A gift to the local hospital is great, but give a thought to older folks who would benefit just as surely for the price of a nice Christmas fruit basket.

All the landlords, secretaries, bankers, lawyers, doctors, taxi drivers, and assorted other 99.9% of jerks in your everyday life will suddenly undergo a profound spiritual awakening. Each will cultivate a newfound love of their fellow man and desire to obsequiously serve him. That “fellow man" would be you, sucker. So watch out because they all want something.

As for yourself, try to be humble. Money (especially your kind) is going to get you out of a lot of jams. But you”ll soon forget how lucky you are unless you live a sizeable proportion of your lifestyle strictly middle-class. If so you”ll stay sane and retain a good insight on whom to help and whom to hinder.

Unless you are married or were in a prior serious relationship before the jackpot, try and remain celibate for at least three months. That isn”t very long in the scheme of things.