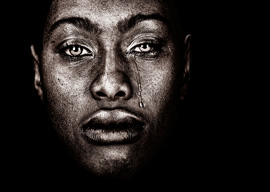 Still scratching their pointy heads over losing an election they were certain that history had preordained them to win, the Democrats are blaming everything except their own stupidity and arrogance.

The intersectional house of cards has fallen. Every maladjusted minoritarian mini-tyrant in the country is freaking the frick out that their ragged, patchwork coalition of misfits is crumbing before their eyes. From coast to coast, every HIV-positive mulatto one-armed transgender lesbian midget is suddenly worried that Trump and his supporters in the heartland will become “normalized.”

Huddled inside a rainbow-colored yet opaque bubble, it’s obvious that they have no idea what just hit them. Many overpaid and demonstrably clueless strategists seem to think that perchance they didn’t call people racists, sexists, homophobes, and Islamophobes enough. Maybe if they just verbally shat upon the stupid, uneducated, hateful, and soon-to-be-extinct white masses in flyover country who put Trump over the top, they could have shamed enough of these irredeemable rubes into voting for a party and an ideology that clearly hates their guts.

Not for a moment does it seem to have occurred to them that maybe it’s not so wise to play aggressively hostile identity politics when your designated opponent is still the demographic majority.

“Maybe it’s not so wise to play aggressively hostile identity politics when your designated opponent is still the demographic majority.”

Listen up, dimwits: When you encourage racial pride in all groups except whites, you aren’t exactly making a case against “racism.” If you have even a semblance of a spine, sooner or later you”ll hear this nonstop sneering condescension about how you were born with a stain on your soul and say, “Hey, fuck you. I”ve done nothing wrong, but you”re really starting to bother me.”

I suspect that for perhaps the majority of those who voted for Trump, it had nothing to do with the stupid, juvenile, leftist catchall excuse of “hatred.” If you really think extraordinarily complex social conflicts over power and resources can be explained by a dumb word such as “hatred,” I hate you.

Instead, a large swath of voters grew so tired of being actively hated, they struck back and said “enough.” They didn’t “vote against their interests,” as is so often patronizingly alleged; they voted against the condescending, scolding, sheltered creampuffs who try to dictate their interests to them.

Emboldened with a cultural power that had grown monolithic, the left egregiously overplayed their identity politics. While relentlessly depicting Trump as a “racist,” they would be incapable of pointing to ONE instance of Trump using the term “white people,” much less directly appealing to them as a voting bloc. Meanwhile, Hillary Clinton and that hyperventilating putz Bernie Sanders were pandering to little brown boys in sombreros, fist-bumping black rappers, and openly appealing to nonwhite racial groups BY NAME.

Democrats and leftists”despite their loud public chest-thumping about being “anti-racist””repeatedly demonstrated over the past eight years that they could never, not once, not for a second, stop thinking about race or shut the fuck up about it. Democrats are the ones who pounded home the point that race is important. They mention race 100 times for every time a Republican dares to utter a word about it.

…[The] Democratic Party is now dominated by identity politics, which defines whites, particularly heterosexual males, as oppressors of every other population in the U.S. Why should the targets of such thinking embrace an ideology that scorns them?…They have created entire fields devoted to specializing in one’s own “identity,” so long as that identity is non-white, non-male, or non-heterosexual….When Clinton called half of Trump’s supporters “racist, sexist, homophobic, xenophobic, Islamaphobic”you name it” who belonged in a “basket of deplorables,” she was speaking the language of the academy, now incorporated into the Democratic worldview.