How to Tap the Missus 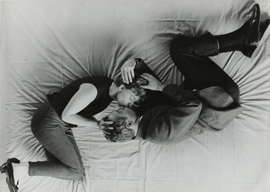 6. MAKE THE KIDS LAUGH
You”d think disciplining the kids would make her feel like she’s living with a real man who can take care of her. Yelling, “Listen to your mother!” when she calls them for dinner shows you have her back, no? Nope. It makes her think this is the same old crappy marriage everyone else has. I”ve noticed I get way more points when I make the kids giggle. If your kids are running around the house laughing hysterically like it’s a birthday party, you had better save some energy for her because you”re about to get seriously laid, my friend.

7. DON”T TALK ABOUT YOURSELF
Remember in your single days how fruitful it was to ask her about her life? Apparently, that still applies. It’s cathartic to bitch about your job when you get home, but she’s not your therapist. She’s still that girl you were trying to pick up when you first met her. To give up on that is to give up on the whole marriage. When you get home, ask her about her day and do everything you can to pay attention. I find it helps to dig your fingers into your leg or bite the inside of your cheek until it bleeds.

8. DATE NIGHT
Our parents never had date night, but after they became our parents, our parents never got laid. Taking time out of your busy day to book a babysitter is so counterintuitive it borders on pussy-whipped, but it’s about the only sure thing a married man has left. Date night means she gets all dressed-up. That makes her feel less like a live-in maid who babysits your kids and more like the chick in that Chris de Burgh song.

9. SNUGGLE
I hate getting “comfers cozers,” as my wife puts it. I don”t even take my boots off when I get home, but married women don”t want to get banged by Lemmy in the bathroom. They want to have a sleepover with their gay friend and maybe get an “internal massage” after he leaves. That means you have to put on some stupid pajama-type clothes and sort of spoon her in front of the TV while pretending sex is the last thing on your mind. (I”m not sure why, but I find picturing Kevin Spacey’s gigantic head floating around the living room helps.) When she starts channel-surfing and getting bored, calmly turn off the TV and make your move. Her gay friend just left the building.

10. FIGHT
Fights are intense when you”re married because it’s like fighting with yourself. You know all the weak spots and can dig the knife right in just the right spot before twisting it in. I knew a heavyset urban-music producer in Vancouver who was arguing with his late-thirties girlfriend. She was just getting over a drug addiction and as he stormed out of the room she yelled, “See ya, fat wigger,” and he replied, “Goodbye, junkie spinster.” I”ve never heard more perfectly honed attacks.

Crossing the line usually means about three days on the couch, and it’s during that time you”re reminded of what life was like without her. Where the fight highlights all the worst things about a relationship, the doghouse reminds you why you got married in the first place. I don”t recommend starting a fight just for makeup sex, but the “You don”t know what you”ve got til it’s gone” boner is so intense, it can”t not make a baby. And that’s why we”re here, after all.