How Uncanny Was My Valley? 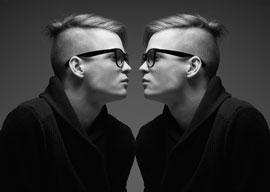 Determined to disprove the clichÃ© that “opposites attract,” Pierson reviewed one million matches at eHarmony and concluded that both men and women, despite their protests to the contrary, want a partner who “resembles them” rather than “complements them.”

However, the variables she focused on were mostly nonphysical: personality traits and political views, for instance. In a separate, presumably more “scientific” study of physical characteristics, participants tended to pick prospective mates “who shared traits like eye and hair color with their opposite gendered parent”and that’s pretty much saying they liked people who looked like them,” as Kate Sullivan at Allure boiled it down.

Last year, HBO’s Behind the Candelabra: My Life With Liberace dwelt on the absurd and unsuccessful lengths to which the flamboyant showman went to remake his much-younger lover Scott Thorson into his own mirror image.

Being a straight woman and all, I can”t figure out why anyone would want to make over (or in this case, under) the blond hunky Thorson.

Thorson “explains” that Liberace was planning to legally adopt him, you see, and wanted him to look like his son.

Liberace went under the knife a month earlier, but he came close to calling the whole thing off at the last possible minute. According to the plastic surgeon’s longtime office manager, Liberace initially “refused to remove his wig in the operating room” and “had to be persuaded before the surgery could begin.”

Maybe there’s something to all that “narcissism” stuff after all.