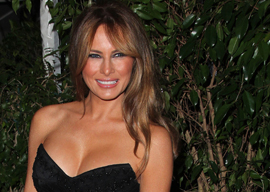 There is a 42-year-old mother in Houston who, in her mad longing to be “the perfect woman,” has had eight plastic surgeries, a tummy tuck, a liposuction, a Brazilian butt lift, a nose job, and other vain transfigurations. Claudia Sierra, who perhaps finds motherhood less satisfying than looking in the mirror and being the object of validation on social media, is on a mission to resemble our elegant European first lady, Melania Trump, who, when not reminding American men that feminine women still exist (they’re just not of American stock, for the most part), torments third-wave feminists by being sublimely superior in appearance, manner, and sensibility to their singular wretchedness. Behind Sierra’s idolatry—which, we learn from the media, many women now share—is the familiar human need for esteem, and the idolatry itself is an example of a familiar phenomenon: the need’s perversion.

Nietzsche emphasized the special value of “sounding out idols,” for “there are more idols than realities in the world,” nor is any idolater free. Idols must be overcome, but it’s a hard task since human nature, in John Calvin’s phrase, is “a permanent factory of idols.” This truth the close observer of human affairs can see everywhere. Although intellectuals affect to be wiser than ordinary people, in their behavior most evince an idolatry that is rather amusing in view of their defining mental pride. It is not so much value that matters in the world as its appearance. Intellectuals, who are mostly dull pretenders in whom the only exceptional thing is unjustified pride, attach themselves to false value like mosquitoes in June. The poetry reading, the art gallery, the academic conference, all abound with posers, kowtowers, name-droppers, networkers, and other food for satirists. In graduate school at the University of Maine, I was moved to laughter by the spectacle of Steven Evans, a feminist best known for their opposition to “patriarchal poetry,” and the postmodern would-be novelist and garage-rock star David Kress, because such men seemed to care more about making “friends” of certain brand-name visiting writers than literature itself. I trust, however, that the newly appointed Stephen King Chair will use her expertise in women’s studies and feminist theory to enable the English Department to be successful at keeping up with Hamward, Dearthmount, and the rest of the Itchy League, without whose witch-hunt virtue democracy would surely die in darkness.

“To tally up the examples of the aspiration to esteem taken to degenerate excess would be an inexhaustible endeavor.”

Ordinary people, of course, also bear out human nature’s powerful inclination to idolatry. Playing basketball over the years, I have encountered numerous black men who had tattoos of certain rappers on their bodies. These are the sort of men who, though they may not even have a bank account, dealing as they do with the local cash-checking businesses, will still spend hundreds of dollars on a pair of sneakers whose value resides in their being another man’s brand: Kevin Durant, Paul George, or whoever. When it comes to people who are famous, most humans betray a reflexive slavishness, akin to their manner with authority: Being so little in themselves, and so incapable of self-reliance, they consider it valuable indeed to meet or have some indirect association with a celebrated figure, even if he has no real merit, as in the case of the Kardashians, the first family of America’s glittering dark age. “Look at what I got, everyone!” screams the paltry soul about some fool’s autograph.

Idolatry is a perverse consequence of man’s innate need for esteem, of his profound and often violent desire to be acknowledged as significant by other people. Machiavelli, whose psychological penetration was the source of his still-unmatched political acumen, believed that the distinction between children and adults is somewhat simplistic: Ultimately, we are all as little children—children of pride, we might say—since our primary determining value is esteem. Human life is inherently social, so esteem requires that other people recognize us. We must also measure ourselves against them, for all value is either comparative or meaningless. How right, then, is Bertrand Russell: “‘Look at me’ is one of the most fundamental desires of the human heart.”

Yet from this impulse spring countless miseries, from sibling rivalries to dead spouses. For human nature, far from reflecting the stiflingly orderly, tidy, and tractable character of “professional life” in our day, is irrational, insatiable, and more like the fearsome madman than the sober philosopher. The most unique thing about us, along with our freakish self-consciousness, is that we are evaluating animals. But man being a creature of unending needs and desires—the most essential of them negative in character, having to be met again and again—our need for esteem is more like scratching an itch than a stable bed: There’s little rest for our vanity. To tally up the examples of the aspiration to esteem taken to degenerate excess would be an inexhaustible endeavor. The millions of perpetually half-naked women in our culture, whether they are 13 or 40, whether they are perceived on the streets, on the internet, or wherever, are all saying to the world, like Claudia Sierra: “Here I am in my beauty. This is my value. Esteem me.” But this excess of vanity—woman’s characteristic vice, as it were—corrupts the character and the judgment. Women develop inflated egos and therefore unrealistic expectations, reflected by the fact that women now initiate about 70 percent of divorces. Like a poker player who thinks her already winning hand can be stronger still, the standard self-delusion of the American woman proudly declares, “I’m not gonna settle—I deserve better.” And so she sallies forth to her unseen doom. May she end up with the cat or sexbot she deserves.

Just as woman’s desire for esteem, once it becomes perverse, shows itself most frequently in the form of bodily narcissism, so man, who wants nothing so much as sexual satisfaction with a woman, shows his related vice through extreme ambition, whereby many a Ken gets his Barbie. The politics of the workplace—vicious to the extent that one gets ahead, and a heat few women can take—testify that we not only define ourselves through competition, but also through the conflicts with which competition is often one. The horrible actions of the world’s tyrants, in many instances, amount to this statement: “I am a man whom you will esteem.” Prisons and graves all over the world are filled with men who, in response to not receiving the esteem they craved, decided to punish others. And yet, without this inner monstrousness, this will to affirm the self at any cost, art and science and civilization itself would not be the splendors that they are. Many great artists—Michelangelo, Milton, Wagner—have been very disagreeable personalities; it is a good question whether their achievements would exist as they do without the demonic will to glory those men exemplified.