I Wish I Were in Cairo 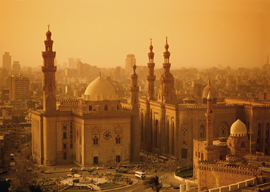 My view is that the US undermines its pro-democracy rhetoric with its consistent policy of preventing democracy in the dictatorships it underwrites.

Let us hope that someone within the apparatus will forward US Embassy and CIA cables to WikiLeaks so that we may read what the US has been negotiating with Mubarak, his army chiefs, and his intelligence services to maintain America’s dominant position. At first, Mubarak seemed as expendable as the Shah of Iran or Ferdinand Marcos. Then Obama’s envoy, former Ambassador to Egypt Frank Wisner, announced after seeing Mubarak: “The president must stay in office to steer those changes through. I therefore believe that President Mubarak’s continued leadership is critical; it’s his opportunity to write his own legacy.” Mubarak, who sponsored Egypt’s last fraudulent election, is as unlikely as Chicago’s Daley family to suddenly become electoral probity’s guardian. Soon after Wisner spoke (or misspoke), Agence France-Presse reported from Munich, where Hillary Clinton was lecturing the world on democracy again: “A member of the US delegation to the security conference in Munich said that Wisner was speaking as a private citizen and not on behalf of the US government.” While it is difficult for journalists to understand what is going on in Tahrir Square, the Obama White House and its State Department’s machinations take us to a new plane of mystification.

Perhaps it’s just as well I”m home in rural France, where I, like Mubarak, am in transition. From the moribund profession of journalist and writer, I am moving to the equally future-free position of publisher. Under the kind aegis of London’s independent house Quartet Books, I am setting up the modestly named Charles Glass Books to produce four or five journalistic volumes a year. Printed books. On paper. Please help the Glass children and grandchildren by buying as many copies as you can afford. My first blockbuster was going to be a brilliant biography of the greatest journalist of his generation, I. F. Stone, American Radical. I”m publishing it in May, but my sudden acquisition of the British rights to StÃ©phane Hessel’s French bestseller, Indignez-Vous!, means American Radical will be second. I have about ten days left to get it out under the title Time for Outrage! This means multiple hours writing a foreword, revising the English translation, checking the endnotes, commissioning the artist John Springs to draw the cover illustration, and asking the designer Jonathan Pelham to do the cover. My old friend Jacqui Graham, who resigned as chief publicist at Pan Macmillan books after thirty-two years there, is helping with the promotion. Other friends have offered time and advice, for which I am grateful, as I run this operation from the kitchen table. Having complained about publishers since my first book came out in 1989″including proposing that firing squads deal with them all”I am beginning to see things their way.

Still, I wish I were in Cairo.