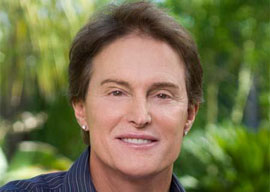 In February, Jenner admitted to getting his Adam’s Apple shaved down. This procedure is typically performed on male-to-female transsexuals, but Jenner insisted his reasons were purely cosmetic. (Which is weird enough anyway.)

Today, the 64-year-old’s hair is shoulder length and his eyebrows severely tweezed. He looks remarkably like former tennis champion/human male Dr. Renee Richards, who famously filed a successful suit against the United States Tennis Association for barring her from competing in the pros as a woman in 1976, and who is now, allegedly, serving as Jenner’s “sex change coach.”

Lending a pall of believability to these rumors is the undeniable, and somewhat counterintuitive, reality that tall, angular, thin-lipped Bruce Jenner will make an exceedingly unconvincing woman”as do most male-to-female “transpeople“ or whatever the hell they”re calling themselves this week.

(I suspect a new mandatory appellation”maybe a Prince-style hieroglyph, suitably unsullied by the cis-privileged, patriarchal letters of any known alphabet”is currently being designed.)

The post-surgical subjects struck me as caricatures of women. They wore high heels, copious makeup, and flamboyant clothing; they spoke about how they found themselves able to give vent to their natural inclinations for peace, domesticity, and gentleness, but their large hands, prominent Adam’s apples, and thick facial features were incongruous (and would become more so as they aged). Women psychiatrists whom I sent to talk with them would intuitively see through the disguise and the exaggerated postures. “Gals know gals,” one said to me, “and that’s a guy.”

McHugh’s blunt and surpassingly politically incorrect observations continue at some length and make for refreshing reading. Thank God, in this case at least, for tenure.

Alas, the voluntary feminization of the Western male proceeds apace. Recently engaged Johnny Depp sports a female’s diamond solitaire. Meanwhile, far below the higher echelons of celebrity, young fellows in Los Angeles and beyond boldly prance about in high heels.

Did I just say “naturally”?