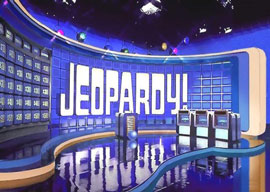 In the past, they were a lot more focused on what we call “hard knowledge” and historical facts, dates, who wrote what book, and so on. Now you”ll see entire categories devoted to Taylor Swift or celebrity reality shows. I wouldn”t say that women are necessarily better in those categories, but that is a consideration.

Then there’s that betting thing. Trebek earned his reputation as a misogynist in part by observing that female contestants think of those dollar amounts on the blue screens just below their waists as “real” cash, and are therefore hesitant to risk it. Men, however, rightly view those digits as virtual “house money.” That cash isn”t real until they win it, and they stand a better chance of doing so by placing a big, bold bet.

Hey, I”m just glad well-off, white American women have discovered something new to bitch about. #FreeOurGirls was getting boring. Thank God Elliot Rodger came along, so they could invent a new hashtag, #YesAllWomen.

(I”m one of those “all women” and still don”t really understand what this one is in aid of”something to do with being wolf-whistled at by construction workers. Which, as I”ve written before, has never happened to me, alas. The closest I ever came was a couple of years ago, when a workman repairing a Toronto sidewalk yelled, “I love your T-shirt!”, which read “IT’s NOT RACIST IF IT’s TRUE.”)

Someone who picked up on the #YesAllWomen meme? Notorious Jeopardy! contestant Arthur Chu, who gained notoriety during his brief but eventful run as “that angry nerd.”

Meanwhile, two Indian teenagers were gang-raped and murdered when they were out looking for a place to take a crap. It’s a situation that plays out all over the world every day, but it’s easier and more fun to complain about the tribulations of women on Jeopardy! rather than in it.