In Praise of Broken Windows Policing 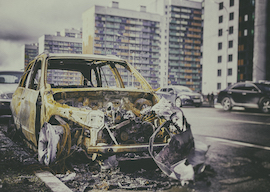 For many of us who live in American cities, certain things each year signal the arrival of warm weather: the joyful sounds of children playing in the street, the pleasant sight of pretty women in their dresses and skirts, and more young black men shooting each other.

It stands to reason, of course, that there would be greater incidences of violence and murder among criminal types (of all races) during warm weather. More people on the streets means more trouble to get into, and so it is common in some of our cities for a half-dozen people or more to be shot, or shot and killed, in the span of a weekend’s mischief.

So, what is to be done about this problem? Here, no innovation is necessary, because we already know what works, although, as with so many reasonable things these days, there is formidable moralistic liberal opposition. The solution is prevention, and that means broken windows policing.

Developed by two outstanding social scientists, James Q. Wilson and George Kelling, broken windows policing is a distinctly conservative approach to crime. It eschews the standard liberal fantasy—namely, obfuscating moral abstractions and technocratic social engineering—in favor of the empirical, the concrete, and the commonsensical. For the theory is based on observation of good police work itself. As Heather Mac Donald puts it in her recent essay in City Journal on Kelling,

He had accompanied cops walking foot beats in Newark, N.J., and had documented how they enforced local norms of order, whether keeping panhandlers away from bus shelters, quieting noisy youth, or rousting unknown loiterers. The law-abiding residents of the community backed the officers wholeheartedly, ridiculing norm violators and providing information on who was a “regular” and who a “stranger.”

The effectiveness of broken windows policing has been borne out by science. Mac Donald again:

Academic critics and the press…challenged the idea that allowing disorder to fester invites more lawbreaking. In 2007, sociologists in the Netherlands constructed an elegant series of experiments to test the hypothesis. The social scientists defaced discrete urban locations with graffiti and litter and created other signs of public-norm violation. In every case, passersby were far more likely themselves to litter, trespass, and disregard other social rules in the disorderly environment than in the orderly one. They were twice as likely to steal a stamped envelope visibly containing cash from a mailbox that was covered with graffiti than from a mailbox that was pristine.

“It eschews the standard liberal fantasy in favor of the empirical, the concrete, and the commonsensical.”

Other research also has demonstrated the considerable value of the method. Broken windows policing is the reason for the well-known reductions in crime in New York City in the 1990s and the 2000s. I myself have witnessed its effectiveness in the Philadelphia area. Some years ago, while working as a reporter for a small newspaper in Delaware County, PA, I saw a group of black male high school students fighting on the streets of Upper Darby shortly after school had let out. Such violence is rare in Center City Philadelphia, at least, because every afternoon during the school year, the streets are packed with cops who keep the youngsters in line. Out of curiosity, I have sometimes struck up conversations with these men. “These kids are so bad that they need all of you guys out here?” I half-joked to one a few weeks ago. “Pretty much,” he replied, and I thanked him for his thankless work.

There is ample evidence that, insofar as police do not do or stop doing broken windows policing, crime is high or increases. The most famous example of this phenomenon is the Ferguson effect. According to Wikipedia, “the term was coined by Doyle Sam Dotson III, the chief of the St. Louis police, to account for an increased murder rate in some U.S. cities following the Ferguson unrest.”

Why, then, isn’t broken windows policing the norm in the U.S.? Why is it so controversial for police to clear the streets in neighborhoods where it’s reasonable to believe that not doing so may allow for violent crime, or rather, more of it?

There are many reasons. There are more than a few blacks who, resenting their group’s lesser overall social status, do not want to accept group disparities in crime rates, who do not want to face the consequences of human action. To some extent, that is understandable. Influenced by awareness of the past injustices blacks suffered—slavery, Jim Crow, police brutality—blacks and others think that group disparities in crime rates must be owing to discrimination, to police “targeting” blacks. But though discrimination, and unjust police violence, against blacks still occur, there has been tremendous progress in this area. While it may seem counterintuitive to some, today police are far more likely to be murdered by blacks than vice versa. The politically incorrect reality is that, at only about 4 percent of the population, black men under 40 commit more than half of all homicides, and are disproportionately represented in violent crime generally.

Nor can poverty, the common liberal explanation (motivated by blind pity), account for this. There are places around the world where, though people are poorer than anyone in our poorest cities, violent crime rates are still a lot lower than those in Baltimore, Detroit, St. Louis, and other American ghettos. Though poverty is correlated to crime, poverty does not cause crime, because people do have free will and choose to do what they do.

Nevertheless, we are not born as responsible moral agents. We must be socialized and learn to live by virtuous habits. And here many parents, especially among whites, blacks, and Hispanics, are failing. Not that poor parenting alone is to blame—there are plenty of people who repeatedly make bad choices despite having received good parenting. Although much of morality, in all places and times, is just a mask for power and utter hypocrisy, no culture can do without morality, and my friend Amy Wax is right that we require what she calls “the courage to moralize.” Yet such moralizing has to be unflinchingly truthful and sincere, willing to go against the grain. That is what she means by courage.

The problem, though, is that this virtue is hindered by the delusions and class interests of genteel liberals. For rather than realizing that some people just need to change their lives, and to be told to change their lives, these wrongheaded moralists constantly read discrimination into contexts where it does not exist, and condescendingly treat others as nothing but passive victims of poverty, as if to be poor were an intrinsically criminal or degenerate condition. In some cases, this deplorable habit is attributable to ignorance. In others, to fear of appearing racist. In still others, to careerism.

All of these defects are common among social scientists and intellectuals, who have, after all, much to gain by being or appearing to be on the right side of error, so to speak. In a penetrating essay in the summer 2017 issue of City Journal, “What Criminologists Don’t Say, and Why,” criminologists John Paul Wright and Matt DeLisi wrote:

[C]riminologists’ lack of direct contact with subjects, situations, and neighborhoods—their propensity to abstraction—invites misunderstandings about the reality of crime. Most academics have never met with women who have been raped or children who have been molested, or seen the carnage wrought by a bullet that passed through a human skull, or spent a lot of time with police on the street. The gulf between numbers on a spreadsheet and the harsh realities of the world sometimes fosters a romanticized view of criminals as victims, making it easier for criminologists to overlook the damage that lawbreakers cause—and to advocate for more lenient policies and treatment.

Compare these sobering words to what George Orwell said in a letter of October 1938: “What sickens me about left-wing people, especially the intellectuals, is their utter ignorance of the way things actually happen. I was always struck by this when I was in Burma and used to read anti-imperialist stuff.”

To be sure, some of these leftists mean well, but their moral biases, which blind them to the crucial uncomfortable facts, are nonetheless harmful. Perceiving a nonexistent morality play in situations where it is necessary to face “the harsh realities of the world,” including a great many failures of personal responsibility, does not help others—though it does allow you to maintain your weak-willed failure to recognize the truth. Simply throwing money at bad habits—the common “solution” of what John Derbyshire calls “Good Whites”—does nothing to alter them. On the contrary, it merely enables them and effectively justifies the faults and excuses of those who need to change—which only they can do for themselves.

As with incompetent criminologists and other social scientists, so with journalists. Today, much of what passes for journalism is about as intellectually responsible as a game of Whisper Down the Lane. The propaganda of ignorant journalists serves to obscure understanding and to inspire resentment and divisiveness throughout the country. This is particularly true when it comes to reporting on police work. Thus, where people should be trying to live better, they are presented with a cloud of cheap moral confusion in which they can easily take refuge, an option that is certainly preferable to the hard work of self-examination and self-correction.

By giving cops so much discretion, broken windows policing entails huge potential for discrimination and misconduct. So, it must be conducted with the utmost internal scrutiny. Independent of that necessity, however, the complexity of certain situations, and the limitations of human knowledge and judgment, are such that sometimes mistakes are inevitable. Anyway, broken windows policing works and should be the norm everywhere. Whether the U.S. will have the will to implement it as such is another question.