In Defense of the Rich 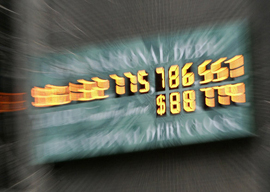 “Let’s put it this way,” says the uneducated liberal with the nursery-school analogies, “if Tommy has ten building blocks and Joey only has two, wouldn”t it make sense to give Joey a block or two?” Sure, if Tommy hadn”t built those blocks with his bare hands and if Joey (real name JosÃ©) was even registered at this school.

For some strange reason, the nursery decided there are only a dozen blocks in the world and without Tommy’s charity, JosÃ© has no hope of acquiring his own blocks. On top of this mistaken assumption, the nursery has decided it should be the one that seizes Tommy’s blocks and decides exactly how many of them JosÃ© deserves. They will charge Tommy thirty blocks for this transaction, but he can pay them back over time.

Amid all the doomsday predictions regarding America’s growing wealth inequality, few are willing to embrace the possibility that the current system could actually be somewhat fair. Maybe the top 1% are that rich because they”re that good. After all, we”re not British. Americans don”t catapult to the top because of a posh accent or an appealing last name. Most of our rich are tacky nouveau riche in hideous McMansions and loud golf pants. They didn”t get rich because they stole from you. They got rich because they created something for you. Warren Buffett started out selling chewing gum door to door. Sam Walton of Walmart fame waited tables in exchange for food. Brains are often more valuable than brawn. Could you have invented Facebook? More importantly, could your average migrant farm worker?

“Stiglitz keeps talking about how the rich “take” America’s money, but they never took anything from me. The only entity that has ever taken anything from me has been the government.”

It’s fashionable to be disgusted with the increasing gap between the rich and the huddled masses, but nobody mentions the other huge shift that happened simultaneously: The locals gave up breeding while illegal immigrants” sons bred faster than a herd of cucarachas“sorry, I meant adorable bunnies. America’s population surge is all Mexican, and I think it’s fair to say we”re not getting their best and brightest.

60 Minutes would like to tell you about JosÃ© Hernandez, who broke out of the farm and became an astronaut who will now take tacos and a Mexican flag to the moon. ¡Felicidades! After hearing an incredibly rare anecdote like this, the left says, “If only all our disadvantaged could have access to this kind of education.” Then they leapfrog over to, “We need the rich to invest in our education.” Uh, the rich already did. It didn”t help. Surely everybody now knows that pouring money into education only serves to further bloat our bureaucratic mess of an educational system. Also, when did the affluent become tasked with turning the poor into astronauts? Getting an education is free”even for illegals. If you want to get a secondary education, dip your toes into the sea of grants and scholarships community colleges such as Baruch are throwing at anyone who puts up their hand. Even without aid, full tuition there is less than $5,000 a year.

I took math in college but I still have trouble wrapping my head around the numbers. On one side we have people such as National Review editor Kevin Williamson, who claims we”ve taxed all the tax we can tax and the only ones with any real money left have no intention of parting with it. Ayn Rand Institute president Yaron Brook agrees and pointed out on Stossel recently, “Once you raise the taxes, the rich change their behavior and you don”t actually get the revenue….Even if you could tax [the top 1%] at 100%, you still won”t make up the difference.”

At the other end of the spectrum, we have intellectuals such as Joseph Stiglitz blaming corporate CEOs and inept bankers for bankrupting the country while “1 percent of the people take nearly a quarter of the nation’s income [my emphasis].” The self-admittedly quixotic Sam Harris agrees and suggests America’s billionaires begin, among other things, “repaving our roads.” Harris refuses to donate any of his disposable income yet waxes poetic about the days the rich paid 90% in taxes. He neglects to mention that the number of wealthy Americans has tripled since America began lowering the inhibitory 90% rate.