In Search of Sexier Scientists 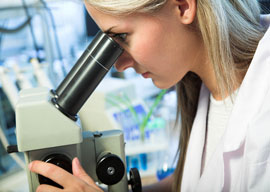 Continuing its blanket coverage of the problems of people who don’t really have problems, The New York Times turns from the plight of female Harvard Business School students to the tribulation of female Yale physics majors.

In “Why Are There Still So Few Women in Science?,” Eileen Pollack, head of the creative writing MFA program at the U. of Michigan, devotes 8,000 words to the churning passions that accompanied her return to Yale, where she was a physics major in the mid-1970s before losing all interest in science and math. Why, she cries out, did society not persuade her to pursue “the prospects, prestige, intellectual stimulation and income” that come with attending grad school in astrophysics?

Together, these Harvard and Yale articles make informative reading because they show how protean feminist analysis has become. Feminism rationalizes a culture of complaint no matter how contradictory the gripes.

“Feminism rationalizes a culture of complaint no matter how contradictory the gripes.”

For example, the Harvard article recounted a lesbian dean’s struggle to prevent heterosexual women students from coming to class on Halloween dressed up in “sexy pirate costumes.” In contrast, the Yale tale told by Ms. Pollack, a middle-aged girly girl with an ex-husband and a son, protests how our culture discourages women scientists from wearing sexy clothes such as fishnet stockings in the laboratory.

Nationally, female students have come to comprise a majority in almost all venues of higher education, except the most exclusive. Even the student body of mighty Yale Law School, alma mater of two of the last seven presidents, is now 49.3 percent women.

Among the few remaining academic institutions where men outnumber women are elite MBA schools such as Harvard’s and elite STEM programs such as Yale’s. So they receive an inordinate amount of attention because a male majority facilitates traditional feminist critiques of men as the suffocating mainstream. (Of course, there are also unmentioned advantages to being in the minority sex. For example, would dowdy Hillary Rodham have snagged handsome Bill Clinton if the gender ratio at Yale Law School four decades ago had been more equal?)

To explore the pain of being a young woman surrounded by highly intelligent young men, Pollack quickly found 80 Yale coeds who wanted to talk about their searing emotions. The airing of grievances included:

“The boys in my group don’t take anything I say seriously,” one astrophysics major complained. “I hate to be aggressive. Is that what it takes?…Will I have to be this aggressive in graduate school? For the rest of my life?”

I was tired of dressing one way to be taken seriously as a scientist while dressing another to feel feminine.

Three and a half decades later, a grad student complains to her “about men not taking you seriously because you dress like a girl.”

Fortunately, there is hope abroad:

[Professor Meg] Urry told me that at the space telescope institute where she used to work, the women from Italy and France “dress very well, what Americans would call revealing. You’ll see a Frenchwoman in a short skirt and fishnets; that’s normal for them.”