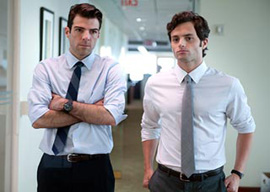 As Margin Call opens, a big iBank’s head of risk management (Stanley Tucci) is abruptly laid off in a cost-cutting drive. As he’s escorted to the elevator, he tosses a flash drive to his right-hand man, a former rocket scientist played by Zachary Quinto (Mr. Spock in the 2009 Star Trek). While the other survivors go clubbing, he fires up Microsoft Excel and discovers that the firm is, technically speaking, bankrupt. He calls his hard-drinking new boss, a thuggish-seeming trader played superbly by Paul Bettany (Master and Commander).

Through the night, the problem goes up the chain of command. Bettany brings in the wise but tired old head of trading, portrayed by Kevin Spacey in the Screenwriter’s Dad role. He notifies his boss, the suave Jared Cohen (played by the blond Australian Simon Baker of TV’s The Mentalist), who calls in the brittle Chief Financial Officer (Demi Moore). Finally, at 3 AM, the CEO, an amusing English salesman (Jeremy Irons) grandly helicopters in.

Irons is still doing that Bela-Lugosi-playing-Richard-Nixon routine that won him the Oscar for his portrayal of Claus von Bülow in 1990’s Reversal of Fortune, and I hope he never stops.

A running joke in Margin Call is that each higher-up understands the statistics less than his underling. As Irons disarmingly explains to the assembled executives: “Speak to me as if I were a young child or a Golden Retriever. It weren’t brains that got me here, you know that.”

Irons declaims, “There are three ways to make a living in this business: Be first, be smarter, or cheat. And I don’t cheat.” Hence, he decides, the firm will immediately sell all their worthless assets to their unsuspecting clients (which, because he’s doing it, can’t be cheating). Spacey’s head of trading objects that his 60 people won’t do it because that would ruin their hard-won reputations on the Street. So Irons and Baker instruct Spacey to promise each trader bonuses of $2.7 million for one day’s dirty work.

Unlike most movies about money, Margin Call quantifies two numbers that deeply interest us about other people: how old they are and how much they make. The CEO, for instance, hauled in $86 million last year, while the lowliest 23-year-old analyst cleared a little under a quarter of a million. Bettany’s 40-year-old floor boss, who has the best role as the Dumbest Guy in the Room, grossed $2.4 million while spending $76,350 on hookers (most of it tax-deductible, as Charles Ferguson pointed out in his documentary Inside Job.)

Unlike bankers, movie stars expect less pay these days, which is good news for fans of movies aimed at discriminating audiences. Shot in 17 days using RED digital cameras, Margin Call reportedly cost only $3,395,000. That raises the question of how this budget was divided up among the veteran stars, but the 37-year-old first-time director’s not telling.