Is it Better to Be Misunderstood or Ignored? 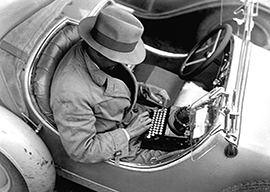 So Deirdre should be happy about the publicity a poorly educated journalist with national connections has bestowed on her book. She should also rejoice at the attention that my “comment on a comment” has given to her efforts.

On another note: The wacky theory that the West was languishing in Bangladesh-like poverty until some precursor “democratic capitalism” came along at some magical point in the last two hundred years goes back to an Enlightenment myth. According to this moss-covered legend, everyone was living in grinding poverty under an oppressive church and brutish aristocrats until men of science and reason rose up and changed our civilization. The Middle Ages are depicted as a cultural and material backwater, and whatever is of value in our world is a recent product”or of a few rational ancient thinkers.

For Friedrich Hayek, the critical times were the Renaissance and Enlightenment. For Michael Novak, in his vulgarized variation of Weber’s thesis about the Protestant precondition for “the spirit of capitalism,” our redemption began with something called “democratic capitalism.” The good guys were the plodding shopkeepers, who were able to thwart and supplant the bad guys.

In my early twenties I had already learned a different version of Western history. My graduate professor at Yale, an Italian Marxist, furnished considerable evidence of significant commercial growth in Europe in the (supposedly benighted) thirteenth century. The evidence in no way resembled much of the modern Third World’s overpopulated impoverishment. I would also recommend Herbert Butterfield’s classic on modern science’s origins. Butterfield demonstrates that ample scientific research originated in what Lowry would consider a pre-modern Western society. This medieval society was already part of an identifiably Western world, perhaps in a way that the Big Apple
has ceased to be. One might also read the French Annales School of the early and mid-twentieth century who charted Mediterranean commerce’s growth in the twelfth and thirteenth centuries. What they depicted are vibrant maritime trade and rising living standards.

Anyone who reads my many blacklisted works would discover a celebration of the bourgeoisie’s distinctive achievements. What I”m vehemently challenging is the idea that bourgeois capitalists were building on a backward culture. By 1820 the West was already a civilizational giant, and by the thirteenth century Western Europe had reached a per-capita income exceeding that in much of today’s Third World. Unlike modern Bangladesh, Western Europe had a sustainable population in the thirteenth century. After the Black Plague in the fourteenth century, the West had a population shortage”not the surplus of hungry mouths in the Third World today.