Is Mitt Serious About Condi? 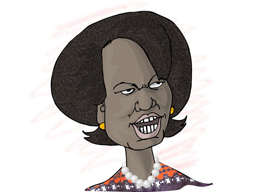 Most Republicans have no idea where Condi stands or what she believes about right to life, gay marriage, affirmative action and the Arizona immigration law. Asked whom she voted for in 2008, Rice reportedly said, “I just want to acknowledge that when the (2008) election took place and after the election took place, it was a special time for Americans.”

Did the candidacy of John McCain make it a “special time”?

My friend and former White House colleague Peggy Noonan says that when she mentioned the possibility of Condi Rice as vice president to a gathering of business types, “spontaneous applause burst forth.” Condi’s nomination, she wrote, would be truly “exciting.”

Peggy’s got that right. The right is boiling with excitement already.

But would it be wise for Romney, who bears no responsibility for the record of George W. Bush, to choose a running mate who would force him to defend a Wilsonian policy of compulsive interventions across the globe “to end tyranny in our world”?

The choice of Rice would be a Romney endorsement of the Bush foreign policy of which she was co-architect, having spent four years as the national security adviser and four as secretary of state.

Tim Pawlenty could help carry Minnesota. Sen. Rob Portman could help secure Ohio. Sen. Marco Rubio would likely deliver Florida and help in a Hispanic community that is 16 percent of the U.S. population and may in 2012 constitute 9 percent of the vote.

Can Condi Rice deliver California? What does she bring?

When a candidate is facing what seems an insurmountable lead, he will often consider a roll of the dice.

But candidates who are running even tend not to take huge risks. Surely there are other ways to shift the subject from Bain Capital.