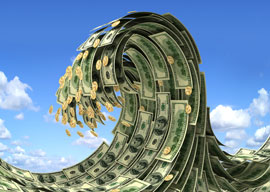 Even our best minds, even former Fed leaders, question current debt levels. This is not new, though the questioning is wider and more urgent than ever before. Hence the appeal of Islamic banking, one surmises. This is one of the savvier gestures made by UK Chancellor George Osborne and Prime Minister David Cameron. The PM went so far as to say, “I want London to stand alongside Dubai as one of the great capitals of Islamic finance anywhere in the world.”

Another score for UK Incorporated? The Financial Times reminds us that Qatar had to bail out the Islamic Bank of Britain, and last year HSBC shut its Islamic banking retail operation in Britain. The trend is only commencing here in the Atlantic regions.

On the other hand, Islamic banks, reinforced by their reliance on real assets and cash, weathered the global economic crisis much better than regular financial institutions. “Globally, the market for Islamic finance stands at $1.2 trillion,” the FT reports”“a figure that’s expected to grow to $2.6 trillion by 2017.”

A risk analyst experienced in sharia-compliant companies and countries told me why George Osborne and his gang are snuggling up with sukuks. “It’s a new source of money,” he told me off the record. “That’s why everyone likes it.” If you offer money in a new form, any form, people will come to you. Especially if they’ve exhausted other sources and are hungry for it, he explained. Whatever advantage is given up in the avoidance of usury, it’s made up for somewhere else, he reassured me.

It’s all packaging. And the sukuk‘s packaging perfectly fits the moment in which we find ourselves, weary as we are of supposed exploitation by the banksters and forewarned by recent history. Can the sukuk possibly not be an attractive alternative investment, a highly exportable, globally friendly product? A gift from Islam, a religion that makes no division between sacred and secular matters (such as financial affairs)? Is a sukuk not less exploitative than other kinds of loans made so hastily in the Western world?

The idea’s that simple: Let’s (hastily) make more sukuks with our new partners! And make some moolah at the same time! It’s a move in which the UK is uniquely positioned to take first-leader advantage.

I first came across the sukuk early on in the fallout from the 2008 financial crisis. In a world of dodgy derivatives and “synthetic” finance, the sukuk appeared to represent an object of purity”a purity lost long ago in the world of capital markets.

Sukuks are kind of like virgins: They are virtuous and less likely to be infected than other products in the financial markets. Are they safer from the contagion of toxic assets, which can turn from an infection into an epidemic overnight?

In an interview with Gillian Tett from the FT last weekend, former Federal Reserve Chairman Alan Greenspan”known as “The Oracle” on account of his ability to make the markets”revealed he feels that the US economic system is dangerous.

“The very nature of finance,” Greenspan explained, “is that it cannot be profitable unless it is significantly leveraged. And as long as there is debt there can be failure and contagion.”

One might infer Greenspan would be drawn to the sukuk. Good luck to the US politician that ushers Islamic finance onto Wall Street, despite the sukuk‘s utility in managing liquidity.

Bitcoin…sukuk. World peace. Why not?