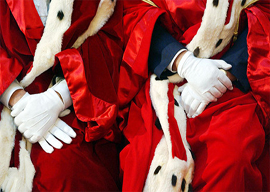 As ever in Italy, during the investigation before Berlusconi had even been charged, someone with access to the telephone intercepts and witness statements (the judges themselves?) leaked the spiciest details to the press, which published them day after day. Such trial “in piazza“ destroys not just reputations but any chance of a fair trial.

The bunga bunga trial, in which he is charged with paying for sex with a minor, illustrates perfectly how rotten the Italian judicial system is. Both he and the girl, Karima El Mahroug”a Moroccan belly dancer known as “Rubi la Rubacuori“ (Ruby the Heart-Stealer), who was 17 at the time she attended his regular parties”deny having sex together. There are no witnesses to the alleged sex. The only evidence to support the charge is that Berlusconi paid money to Mahroug. But Berlusconi is a very generous man who surrounds himself with young women to whom he gives money and presents all the time. So what? It is not illegal to give money to a girl who’s under 18. In Italy, the legal age of consent is 14 for “free” sex and 18 for “paid” sex. I somehow doubt that Silvio, however magnifico he is outside the bedroom, and even though Italian, can get it up any more”even if equipped once in the sack with a purpose-built pump and miniature crane while connected intravenously to a Viagra drip beside his bed. Silvio Berlusconi is 76 and has survived prostate cancer.

No foreign company, if it can possibly avoid it, sets up an office in Italy for fear not just of one of the civilized world’s highest tax rates but of falling into the Italian magistratura‘s clutches.

The Italians should bring a class action, or rather a national action, against Italy’s magistratura not only for all the damage its judges have done to the nation’s Gross Domestic Product but for their massive daily violations of its citizens” most basic human rights. For all the obvious reasons, they will have to bring such a legal action in a country other than Italy.