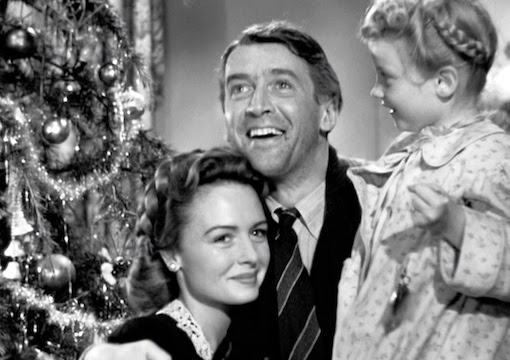 A holiday semi-tradition in the United States is watching the classic Frank Capra film It’s a Wonderful Life. The film stars Jimmy Stewart as George Bailey, a man who has sacrificed his dreams to help others, but is driven to the point of suicide by a series of events threatening his life and livelihood. Just as he is ready to call it quits, a guardian angel appears to help him see the value of his life.

The angel is a bit of a bungler, who needs to earn his wings, so he was sent to help George Bailey in his hour of crisis. Depressed, Bailey says he wishes he had never been born. The angel grants him that wish, showing him what life would be like if he had not been born. All of a sudden, George Bailey is a stranger in his own town, which he barely recognizes because it is so seedy and depressed.

“It is an adult film for an adult audience with no illusions about the world.”

George sees the results of the world deprived of his existence and he comes to understand the value of his life. He prays for his old life back, even though it means going back to the troubles he was facing at the start of the film. His prayer is answered and he rushes home to his wife and family. The film ends with the town coming to his home with money and help, because they heard he was in trouble.

By the standards of the current day, the movie is bracingly realistic, even though it has a happy and uplifting ending. We see a man driven to despair, despite his willingness to do the right thing, no matter the cost. Bailey is no superhero or a man blessed by fortune, but a normal middle-aged man struggling with the reality of life. It is an adult film for an adult audience with no illusions about the world.

Like many classic films, this one was not a huge success when it was released, as there were other good movies released that same year. There was also a clear trend in moviemaking after the war. The studios assumed that audiences wanted positive films after having gone through the war and the Depression. As a result, there was a flood of these types of films competing for an audience.

The movie’s ascent into a holiday tradition was mostly an accident. A clerical error in renewing the film’s copyright in the 1970s meant the film’s images, but not the story, entered the public domain. TV stations still had to pay a royalty to Philip Van Doren Stern, who held the copyright for the original story, but that was much less than was typical for a film, so it was cheap content for local stations.

In the 1980s the film gained a wide audience because it was shown regularly at Christmas and it hit the demographic sweet spot. The generation depicted in the film was starting to die off. Their kids were starting to feel guilty, which led to a wave of nostalgia for the greatest generation. Generation X, caught up in the conservative revolution, liked the film’s traditional themes and values.

This makes for an interesting comparison. The people who first saw the film in theaters were less than enthusiastic. These were people who knew that things don’t always work out, even for honorable men who follow the rules. They saw lots of men do the right thing, but lose everything in the Depression. They knew men in the service who were perfect soldiers, but were killed or maimed in combat.

The people who came out the other end of a decade and a half of terrible times understood that life is often terribly unfair. Sure, George Bailey was an example every man should follow, but they knew a lot of guys like that who ended up desperate men in bread lines or broken men grieving the loss of a son in the war. That’s why the film did not strike the same emotional chord as it would forty years later.

At the other end was an audience coming out of the cultural revolution of the ’60s and ’70s, ready for some normalcy. They wanted to go back to a world that had rules that made sense and where following those rules made a difference. That was what was on offer in the Reagan Revolution. It was a return to a rules-based society in which the virtues of hard work and integrity mattered again.

That was the appeal forty years ago when It’s a Wonderful Life suddenly became a pop culture tradition. George Bailey was not saved by an angel. He was not saved by the government or some corporate white knight. He was saved by regular people who valued the same things he valued and were therefore willing to come to his aid in his great hour of need. It was escapism for people ready to escape the cultural revolution.

There is a bit of irony here with the film’s sudden popularity in the ’80s. A constant theme of left-wing agitation in the ’60s and ’70s was the rejection of materialism. The left was fiercely opposed to business and the commercialization of American life. Just when America was about to embrace the extreme materialism of modern global capitalism, a film with the exact opposite message becomes wildly popular.

That could be written off as coincidence, but the film’s popularity to this day says there is something else at work. It suggests that even a bug-man living to consume corporate product senses that there should be more to his life than waiting for the next comic-book movie or videogame. A man’s life is supposed to have a purpose beyond satisfying his base urges and following the latest trends.

The persistent popularity of movies like It’s a Wonderful Life is a reminder that no matter how deracinated and debased a people, they will still yearn for community that will provide structure and meaning to their life. Every year millions of Americans, the most materialist people on the planet, watch an old black-and-white movie that reminds them that there is more than just stuff. It is a pilot light of human dignity that still flickers in the most soulless, materialistic society in human history.