It’s Hard to Be a Homo in Russia 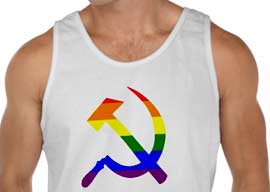 A new Cold War is brewing between Russia and the West, but this time it’s being fought over the rainbow flag.

As the USA rapidly morphs into a continent-spanning version of Fire Island, a homo paradise where tiny fairy sculptors dream there will one day be a 90-foot statue of Harvey Milk wearing leather ass chaps and a butt plug on the US Capitol West Lawn, Russia is currently tightening its sphincter in stubborn resistance to All Things Gay.

Vladimir Putin, who is not averse to posing for vaguely homoerotic beefcake photos, has flexed his ample pectoral muscles in defiance of prevailing Western sentiments on issues such as immigration and anti-Christian blasphemy. And now he’s going after The Gays.

“A new Cold War is brewing between Russia and the West, but this time it’s being fought over the rainbow flag.”

In July he signed a law banning the adoption of Russian children by same-sex couples. And in June he green-lit a statute banning pro-gay propaganda aimed at minors. The law passed in the Kremlin by a vote of 436-0. Its wording is broad and vague, and depending on who’s interpreting it and what political axe they’re grinding, it either specifically forbids Russians from proselytizing the “gay lifestyle” to schoolchildren or it broadly seeks to criminalize the very existence of gayness.

A slew of recent violent attacks on homosexuals in Russia have fueled Western leftist outrage. In January, 10 gay activists were beaten by a much larger mob during a protest. In May, a 23-year-old in Volgograd was murdered during a drinking party after revealing to his friends that he was gay. His attackers stripped him naked, jammed beer bottles into his rectum, sliced off his penis, and bashed his head with a 44-pound rock. In June, three assailants stabbed and trampled a 39-year-old gay man to death on the Kamchatka peninsula before stuffing his corpse into his car and setting it ablaze. Last Friday, a group of former paratroopers swarmed and attacked a gay activist in St. Petersburg. The assault was captured on video.

In a video that is equally as stomach-churning, a Berlin drag queen known as Barbie Breakout expressed his outrage with Russia’s anti-gay climate by sewing his lips shut.