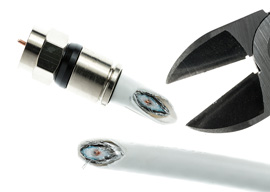 I thought the leftist obsession with getting people fired would die down after Trump won, but it’s still “alive and well.” They just got a sketch-comedy show called World Peace canceled because some of the contributors like Trump. Instead of realizing their irritating behavior has ostracized them from the rest of the country, the alt-left have decided they weren”t annoying enough and are harassing employers, getting people fired, and making death threats in a futile attempt to turn back time and force America to be #WithHer.

There was nothing racist or sexist or anything-ist about the show. Its detractors never really said there was. They called it “alt-right,” and that’s all you have to do these days. America isn”t great again”yet”and we still cower in fear when someone implies we might be racist. In fact, the accusation now includes anyone who isn”t sufficiently upset about racism.

I know the guy who created the show, Sam Hyde, and I”ve met the (black) exec who developed the show. Sam is a hilarious lunatic who once conned his way into a TED talk and pretended to be a visitor from the future here to warn us. I saw him do a comedy show in hipster mecca Williamsburg where he got on stage and gave a long diatribe about how homosexuality is a sin. I don”t think he really believes that, but it made the audience hysterical. They were screaming at him and running out of the venue. They became the comedy. It was brilliant.

I know the inside story on this ridiculous mess and it’s a perfect example of what political correctness really is: a tangled web of bullshit concocted by vindictive cunts who hate the world. The end result is we all have less fun. The fact that it’s reached Adult Swim (the show’s broadcaster) shows that these economic terrorists are completely insatiable. Most of Adult Swim’s shows are so out-there, they”re not even trying to be funny. It’s for stoned millennials, and old people don”t get it. We”re not supposed to. I get that. What I don”t get is how it became infiltrated by the far left. Even the contributors have gone full SJW and begun cannibalizing their own staff. They were happy the show was canceled. They called for it. When did comedians become a bunch of vegan feminists with PMS?

“I”m a straight white man,” Adult Swim contributor Brett Gelman boldly stated when discussing his reasons to cut ties with the network. “I”m not blocked on a consistent basis when I wake up in the morning because of my race, sex, and orientation.” I”m told Gelman, whose costume-designer wife is black, left the network because they didn”t want him anymore, but he decided to make it about virtue signaling because, as he put it, “the election happened.” This is a big element of these crusades for justice. Half the time the people behind them could care less about the isms they purport to fight. In Brett’s case, I believe he thought this would be a good way to spin being laid off. The irony is, one of the reasons he was struggling was because Adult Swim was in trouble for being sexist. They kept begging Brett to provide more female comedians and he kept suggesting his wife, so they gave up. The quest for more ladies came about the same way it did for SNL and Lorne Michaels. Someone lamented the lack of black women who are qualified for the job and SJWs demanded a change. SNL was forced to hire Leslie Jones just to shut them up. Mike Lazzo is the Lorne Michaels of Adult Swim and he dared to imply women aren”t drawn to comedy because they”re generally not confrontational. Comedy is a conflict sport. They turned to Gelman for a Leslie Jones, but his wife didn”t cut it, apparently. So SJWs made Adult Swim prove they”re not sexist and the guy who got fired for not being able to appease them said he was leaving because Adult Swim is too racist. That’s what political correctness is: a tangled web.

Another vindictive cunt in this ridiculous mess is Buzzfeed contributor Joe Bernstein. He interviewed World Peace co-creator Sam Hyde about his odious ties to the alt-right and Sam called him out on it. Sam knew the question was “How long have you been beating your wife?” and refused to take the bait. He also put the interview up on YouTube, which made Bernstein angry enough to write “The Alt-Right Has Its Very Own TV Show On Adult Swim,” and that eventually got the show shut down. Joe’s the same guy who tried to ruin Patton Oswalt by associating the comedian with a guy who drew an anti-Semitic cartoon.