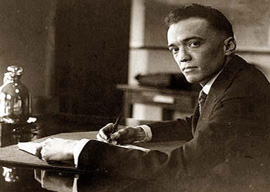 Clint Eastwood’s biopic J. Edgar, with Leonardo DiCaprio as the Washington bureaucrat who ran the FBI and its predecessor from 1924 to his death in early 1972, provides an intriguing data point for tracking the 21st-century struggle between blacks and gays for the upper hand in the Victim Sweepstakes.

Hoover was widely rumored to be either a self-hating gay passing for straight, a self-hating mulatto passing for all-white, or both. So did Clint, a presumably neutral bystander, wind up blaming racism or homophobia for warping Hoover?

Gays have been striving manfully to overtake blacks in the struggle to be above criticism. The precipitating incident for gays’ current anti-black offensive may have been the November 2008 California election when Tyler Perry fans turned out in vast numbers to vote for that nice young Mr. Obama, and, while they were there, against—the very idea!—gay marriage. The press had to construct an elaborate cover story blaming the outcome not on black church ladies but on the hegemony over the California media wielded by Utah Mormons. (I call this popular theory The Protocols of the Elders of Zion National Park.)

“Gays have been striving manfully to overtake blacks in the struggle to be above criticism.”

Ever since, gays appear to have been out to take blacks down a few notches. Gay groups have been busy publicly humiliating Kobe Bryant, Tracy Morgan, and other black heroes.

This month, sleazeball director Brett Ratner was hired to produce the upcoming Academy Awards telecast, presumably so he could persuade the great Eddie Murphy to come out of the seclusion he’s mostly maintained since 1997 (after that unfortunate transvestite prostitute incident) and host. But Ratner was quickly canned for joking that “rehearsing is for fags.” Murphy, whose famous 1987 stand-up act in lavender leather was largely based on what’s now gingerly being called “the three-letter F-word,” immediately bailed.

Hoover’s ancestry on his father’s side was shadowy. Gore Vidal, another Washington DC local boy, remarked: “It was always said of him—in my family and around the city—that he was mulatto. People said he came from a family that had ‘passed.’”

But J. Edgar ignores that intriguing angle for the well-worn story of Hoover and his longtime companion, strapping younger man Clyde Tolson (played ineptly by The Social Network’s Armie Hammer, who is the great-grandson of Bolshevist billionaire Armand Hammer). Hoover, who never married, was accompanied everywhere by Tolson. Café Society hostesses knew to invite Hoover and Tolson as a couple.