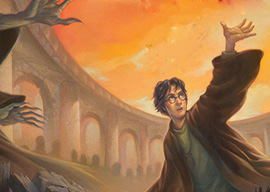 Some old movie series, such as the James Bond flicks, have gone on longer than Harry Potter. Each Bond film, though, is relatively self-contained. Yes, it helps to know who M and Moneypenny are, but that’s about all you need to know to follow the story. In contrast, Rowling has constructed a single plot of exhaustive intricacy.

Despite Baroness Greenfield’s fears, Deathly Hallows: Part 1 consists of almost nothing but “cohesive narrative and long-term significance.” Nor does the movie provide instant gratification. It exists merely to set up Deathly Hallows: Part 2“the finale film coming next July 15″by driving the good guys to the edge of despair. Part 1 is not only complex, it’s uncompromisingly aimed solely at readers of the book. With 44 million copies of Deathly Hallows in print, that’s more than enough moviegoers.

Driven out of their wonderful Hogwarts School by Headmaster Dumbledore’s death in Harry Potter and the Half-Blood Prince, Harry and his two friends, Ron Weasley and Hermione Granger, hide from evil Lord Voldemort by wandering aimlessly in North Yorkshire National Park’s empty winter landscapes. The two boys and one girl have little to do except mope over their relationships, as if this were merely a much more competent entry in the competing Twilight series.

This isn”t a movie like Inception that works hard to keep the audience clued in. The three classmates” main motive is to search out and destroy a Horcrux. I kept wondering, “What’s a Horcrux? And am I the only person in this packed theater who doesn”t know?” Harry Potter aficionados will be enthralled with the movie, while casual admirers of the series like me are likely to be bewildered.

Jerry Seinfeld dissents from the attention-span orthodoxy: “There is no such thing as an attention span. There is only the quality of what you are viewing.” Objectively, Deathly Hallows: Part 1 is another impressive effort. Yet the charm is gone. It’s as if Rowling and screenwriter Steve Kloves had suddenly started listening to Anthony Blanche’s critique of Sebastian Flyte in Brideshead Revisited: “Charm is the great English blight. It does not exist outside these damp islands. It spots and kills anything it touches.” Unfortunately, this new attitude turns Deathly Hallows into a Dark Knight-like slog.

Another problem with Deathly Hallows: Part 1 is too much Ralph Fiennes as Voldemort and not enough Alan Rickman as Severus Snape. The Harry Potter series is stocked with vivid characters such as Mundungus (a spivvy 1940s conman) and Scabior (an Adam Ant-like stand-and-deliver highwayman) that Rowling lifted from British tradition’s inexhaustible depths. As the chief bad guy, however, Voldemort is just another movie villain: the usual elitist right-wing terrorist toff. Rickman played this clichÃ© better as Hans Gruber in 1988’s Die Hard.