Jeffrey Sachs and Bandy Lee: The Stupidest Experts in America 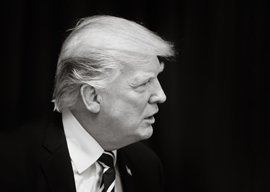 In contrast to this considerable progress, “the fruits of free trade policy during the last 25 years,” Pat Buchanan reminds us, are

the frozen wages of U.S. workers, $12 trillion in U.S. trade deficits, 55,000 factories lost, 6 million manufacturing jobs gone, China surpassing the U.S. in manufacturing, all causing a backlash that pushed a political novice to the Republican nomination and into the presidency.

The actual problem for Sachs and Lee—for which they might want to seek counseling, or at least attend some extra yoga classes—is that Trump’s economic nationalism and isolationism shatter the delusional worldview of these globalist liberal utopians. Ensconced in their delicate professional bubbles, they can’t understand what it means to put their own nation first. They can’t understand that “Trump’s unilateral withdrawal from a growing number of international agreements and bodies” reflects the reality that the U.S. has long invested overmuch resources in these things, while getting quite little in return.

Again, the problem for Lee and Sachs is their very professionalism, their very self-satisfied expertise itself. The source of their wretched condition is well described by Bruce Levine, a clinical psychologist:

Those with extended schooling have lived for many years in a world where one routinely conforms to the demands of authorities. Thus for many MDs and PhDs, people different from them who reject this attentional and behavioral compliance appear to be from another world—a diagnosable one.

I have found that most psychologists, psychiatrists, and other mental health professionals are not only extraordinarily compliant with authorities but also unaware of the magnitude of their obedience.

In short, to put it in uncharitable, Nietzschean language, these are slave natures. “Obedience” is all they know. It is their just lot to obey, and as such, they’re bound to think you’re crazy if, unlike them, you aren’t weak and slavish. Hence why they’re so dangerous!

Speaking of which, the American Psychiatric Association has issued the following statement on Lee: “Using psychiatry for political or self-aggrandizing purposes is stigmatizing for our patients and negatively impacts our profession.”

Similarly disturbed by her hysterical idiocy, Lee’s psychiatry colleagues at Yale have said: “The Department affirms the importance of the ethical standard of conducting an examination of an individual and obtaining proper authorization before publicly stating a professional opinion about that individual.”

Better still is this devastating comment by Dr. Joe Bentivegna:

But the true damage is done with the general public. The Trump-supporting truck driver from rural western Pennsylvania suspects that Dr. Lee would never be questioning the President’s mental stability if the President supported open borders, abortion rights, coddling our enemies and free trade. As the recent women’s marches have demonstrated, President Trump’s most fervent opposition consists of upper middle class women who are isolated from the economic chaos afflicting the working class—and Dr. Lee is a card-carrying member of this demographic.

Encore! cheer my readers, wicked characters, shitlords and deplorables of all sorts. Lee also has dreadful reviews on Vitals.com, of which the most truthful may be: “She’s a quack, pure and simple.”

Lee’s coauthor is no better. A disastrous economist with a knack for wasting your money, fellow taxpayer, Jeffrey Sachs has been widely discredited by William Easterly, a professor of economics at New York University, by the writer Paul Theroux, and most of all, by the journalist Nina Munk. In The Idealist: Jeffrey Sachs and the Quest to End Poverty, Munk demonstrates Sachs’ “well-intentioned, but ultimately naive theories about ending poverty in Africa.” The work was selected as a “Book of the Year” by The Spectator, Forbes, and Bloomberg.

After all this, what remains to be said? Congratulations, Jeffrey Sachs and Bandy Lee, you’re the stupidest experts in America!