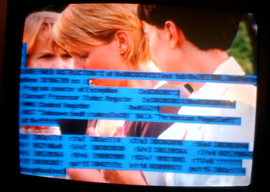 And if you’re standing in your backyard at your kid’s birthday party doing running commentary on all the little darlings barreling down the slide into the pool, bring in a court reporter to sit nearby and type in text. You never know who’s going to watch that video someday.

In supermarkets, you’ll sometimes hear announcements over the loudspeakers about specials. So where are the big screens that display captions? I think we have a suit here. Any attorneys out there ready to take those bastards to court?

This next one is a bit tricky. There are people who, for whatever reasons, have lost their sense of taste (ageusia). Taste is a sense like sight or hearing. Are we going to favor the deaf and the blind over those who can’t differentiate between a potato and a leek? I say all food markets must include, on their shelves, descriptions of how each product tastes. I realize this won’t be easy. So we need to bring in poets and other writers who can create metaphors. We have to try.

And what about old hippies who did too much high-dose acid and have synesthesia? They hear sunsets and see music. What are we going to do for them? The FCC should get cracking on this.

Pioneering the new frontiers of equality can be a hassle, but isn’t that why we’re here—to hassle?

There are roughly 6,800 languages in the world. No one knows how many are written. But let’s say a fifth—1,360. Why in this multicultural society of ours should we ever practice gross discrimination? We need captions in ALL languages ALL the time.

And then we’ll have the beginning of a real JOBS PROGRAM for America.

The Grand Coulee Dam? The Tennessee Valley Authority? Yes, they produced jobs for Americans during the Great Depression. But they were conceived in an era when industrial might was our only option. In this Information Age, we have endless data requiring further explanatory data to reach everyone imaginable throughout the universe. There are no “shovel-ready” jobs anymore, but every word that we utter is ready to be captioned. Let’s get to work.

NOTE FOR THOSE WITH ATTENTION DEFICITS: IN THIS ARTICLE, THE AUTHOR SAYS WE NEED CAPTIONS EVERYWHERE ALL THE TIME IN ALL LANGUAGES. IT’LL CREATE JOBS. OK?