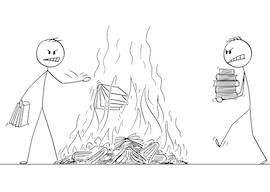 It is often said these days that there is little distinction between left-wing journalism and left-wing political activism, the former being essentially a vehicle for the latter. And certainly, considering things like The New York Times’ 1619 project, this judgment is fair. The old left was primarily concerned with class, labor, and economics. The new left means identity politics, and much of left-wing journalism, like much of academic “scholarship,” seems intended to advance the interests of women, people of color, immigrants, gays, or trans persons, all so-called victim groups. Readers are to learn the various ways in which these persons are “oppressed,” or suffering, at any rate, and what should be done to ameliorate them.

All this increasingly happens under the name of “news,” with the editorial stances and agendas of publications being implicit rather than explicit. Recently, however, The New Republic decided to drop the pretense; the influential magazine did so via a remarkable job advertisement for an “Identity Writer”:

The New Republic is expanding our team and looking for an experienced full-time writer for a forthcoming vertical devoted to issues of race, gender, and identity in the American political scene. Traditional debates on the left about the place of “identity politics” versus claims of universalist income and social support have proven increasingly obsolete under a hard-right governing regime that indiscriminately wages class- and identitarian-war on what it takes to be enemy populations. Now more than ever, the politics of class and identity must be affirmed jointly as the politics of resistance and liberal-left revival.

We’re looking for someone who can chronicle the many ways that identity-related issues belong at the center of liberal politics as we head into a 2020 election cycle that already is pivoting on key questions of racial, gender, and class-related identity.

No doubt this makes a certain old-style type of liberal—a follower of J.S. Mill or Lionel Trilling rather than Judith Butler or Ta-Nehisi Coates—pretty uncomfortable. After all, there are still many people on the left who view identity politics as needlessly divisive. Far better, they think, to focus on what would be good for ordinary workers, a matter that transcends race and other notions of identity. Then there are those who, though they are sympathetic to identity-politics interests, nevertheless do not think these are as important as “universalist income and social support.” And yet, for The New Republic, such are the evils of the “hard-right” Trump regime that these differences are suddenly “obsolete.” Income equality and the right of “women” with penises to compete against other women at track (or wrestling, or whatever) “must be affirmed jointly as the politics of resistance and liberal-left revival.”

“The interesting question, in the face of the relentless left-wing propaganda, is how and to what extent the right will push back.”

Notice, what is perhaps the weirdest thing of all, the editorial principle that “identity-related issues belong at the center of liberal politics.” The “Identity Writer,” in other words, is not simply going to cover liberal politics. The New Republic has made a value judgment about what those politics should be, and it therefore wants someone to “chronicle,” for example, the “new masculinity,” which, as GQ explains, amounts to making men more like women. (Accordingly, there are now men who believe they menstruate.) Nor is this subject less significant than health care or the national debt.

Journalism as dystopian social engineering this approach might be called. And there is plenty of passionate intensity on the left with which to realize the narcissistic endeavor. Still, the identity-politics crowd is sleeping on a volcano. America being a majority white country, you can’t talk seriously about class if you aren’t willing to consider the interests of working-class white men. But how can you do that when white men as such are synonymous with “racism,” “privilege,” and so forth? Trans persons are pushing for universal unisex bathrooms, but this is a safety issue for women, and so feminists and trans persons are at odds over it. Asians tend to vote left, but they continue to be punished academically in order to accommodate underperforming groups—namely, blacks and Hispanics—and it is impossible to square the meritocratic way of life they embody in schools and in the workplace with the left’s insistence on equal outcomes among racial groups. The New Republic, in its delusion, may see the Trump administration’s efforts to enforce the southern border as an “identitarian-war,” but the simple reality, quite independent of anybody’s race, is that you cannot have open borders, or a lot of immigration (whether legal or not), as well as a strong working class and a robust welfare state. For the United States is a country, not a charity or utopia, and like other countries, it has only so many jobs and resources.

Given such conflicts and incompatibilities, what “liberal-left revival” can there really be? On the other hand, the left can certainly keep up its “resistance” to the right, though there is in that nothing but enmity. Indeed, for while the identity-politics crowd has some unity thanks to its overarching resentment toward white men, insofar as it is unwilling to recognize any limits or truly value “diversity,” all the left is good for is causing destruction and debasing the quality of things. We have reached a point where politicians, professors, and journalists routinely apply identity checklists to corporations, academic departments, books published, awards given, and more. Were enough women, people of color, gays, trans persons, etc., hired, represented, published, awarded, or whatever? If not, there is “discrimination,” which somebody—possibly the state—must “correct.”

In reality, of course, given the diversity (and disparities) of talent, ability, and accomplishment in the world, the criterion must be an either-or: either merit independent of identity, or identity independent of merit. The left has chosen the latter, as can be seen from the vast decline of The New Republic, The New York Times, The New Yorker, and The Atlantic, all historically important publications that have gone woke, terribly woke.

Meanwhile, what about the right? The interesting question, in the face of the relentless left-wing propaganda, is how and to what extent the right will push back. On Oct. 9, some students at Georgia Southern University provided us with an example of just how to resist the left. The occasion was a talk on her books by Jennine Capó Crucet, author of, among other things, My Time Among the Whites, described on her personal website as “a collection of essays on feeling like an ‘accidental’ American and the tectonic edges of identity in a society centered on whiteness.” In other words, standard, tortuously boring identity-politics cant. Writing at VDARE, John Derbyshire reports:

The event did NOT go well. In the Q&A session following her talk, several students, amazingly, pushed back against Ms. Crucet’s anti-white sentiments. Sample question:

“I noticed that you made a lot of generalizations about the majority of white people being privileged. What makes you believe that it’s okay to come to a college campus, like this, when we are supposed to be promoting diversity on this campus, which is what we’re taught. I don’t understand what the purpose of this was.”

After more of what Ms. Crucet later called “aggressive and ignorant comments,” several students walked out in protest against her. They congregated outside and commenced burning copies of Ms. Crucet’s books on a barbecue grill [Georgia college students burned the books of a Latina author, by Amir Vera and Natalie Johnson, CNN, Oct. 14, 2019].

Like Derbyshire, I am usually no fan of book burning, but this is good news. The idea that the majority of white people are “privileged” is an insidious falsehood that serves no purpose besides making it seem acceptable—sophisticated, even—to resent white people. The left claims to value diversity, but its actual end is sameness, what it calls “equality,” though the best word for this is leveling. The left should be made to practice what it preaches: If you are serious about diversity, then recognize that whites, too, are diverse; as a group, they are hardly comprehended by the dreary descriptor “privilege.” No need to physically attack those with whom you disagree, in the vulgar manner of Antifa. Simply burn the woman’s dreadful book in a just symbolic display.