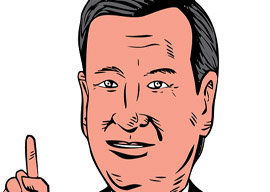 Not much about Cruz’s speech at the convention was surprising. From the bland, empty phrases about “freedom” to the incorporation of Martin Luther King and same-sex marriage into the family of “true conservatism” to the smug condescension toward convention delegates who had frankly had enough of him, all of it was par for the course. This is, after all, a man who launched his national political ambitions by using embattled Arab Christians as a prop to curry favor with that segment of Americans who think Israel should be the 51st state.

Cruz firmly believes that a single-term Hillary presidency, and the Supreme Court justices who would come with it, are a small price to pay for an open path to the nomination in 2020. That’s not surprising, considering that his father, Rafael, a dominionist preacher, believes that Ted is “anointed” to “take control of society.” Back here in the real world, it’s not clear that Ted ever had a path to the nomination. His peculiar civic religion doesn”t seem to have much pull among anyone not buying food buckets from Glenn Beck in Greater Deseret.

This won”t be remembered as Cruz’s tough, principled stand against the Republican Party’s betrayal of true conservatism. Cruz in 2016 isn”t Goldwater in 1960 or Reagan in 1976. If Cruz’s speech is remembered at all two weeks hence, it will be as the last time anyone ever talked about Ted Cruz, the most spectacular live televised suicide this side of Bud Dwyer. Already a man with a reputation as not just a loose cannon but a kamikaze pilot who targets his own side and will say or do absolutely anything, Cruz must now accept that his political career is over. Look for him blogging at The Blaze or leading a new (and no doubt lucrative) life as a televangelist, both tasks he seems far better suited for.