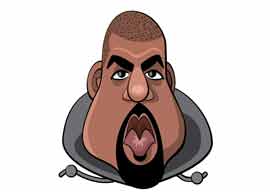 At his own wedding, Kanye said his pulchritudinous bride was “more beautiful than I am talented,” which guests thought was just “the cutest.” Americans laugh at this asshole in polite company, but in public they”d much rather kiss his black ass (which he insists he doesn”t enjoy). No failure is too great to prevent praise for this Afro-American tumor. Back when my kids went to public school, their school library featured a large-type book all about his life (academia has become consumed with progressive biographies of minorities). The book is about a guy who describes himself as a “proud non-reader of books” and includes a chapter called “The Dropout.” Instead of mockery our children are taught to study him. He’s a perfect example of how untouchable black Americans have become.

After he sabotaged Taylor Swift’s Video Music Awards win she quickly forgave him and later presented him with the “Video Vanguard“ award, whatever the hell that is. He was so thankful he later rapped he “might have sex with her” because he “made that bitch famous.”

Kanye’s retardation personifies how cucked we are as a culture. One of the best examples of this is a recent SNL sketch where beta comedian Kyle Mooney says that after a lifetime of practicing rap he’s going to challenge Kanye to a freestyle battle. Mooney purposely throws the match by making a terrible rhyme about Kanye’s breath. West then responds by rhyming the word “Kanye” with itself about a dozen times. Mooney stares at the ground with all the shame 400 years of oppression brings. It’s fucking pathetic. Mooney sums up what we”ve become as a culture. We are so cloaked in guilt we can”t see the fool lampooning our fear. I don”t get it. Kanye West is a fucking retard, and as a true egalitarian I enjoy making fun of him. If you were truly nonracist, you would too.