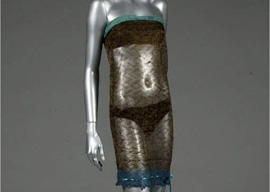 Gaddafi’s still raging against the rebels, Japan is teetering on the brink of a nuclear crisis, and radiation is floating on over to Alaska. Yes, the world’s a mess, but you wouldn”t know it from the in-fighting and break-ups persisting among the most beleaguered of all populations: A-listers. Take a short breather and wade into the shallow end of the news pond.

Kate Middleton slipped into something a little sexy in 2002 for a fashion show and supposedly “caught Prince William’s eye.” The dress, made for a school assignment called “The Art of Seduction,” went up for auction this week and grabbed $125,884. Not a bad deal for the designer”the see-through slip cost less than $50 to make.

A pricey auction is one smart way to capitalize on the furor surrounding the royal wedding. Here’s how not to do it: rush through a low-budget film chronicling Kate and Wills” love story and shoot it in Los Angeles. Among the problems with Lifetime’s quickie adaptation: their 6-foot 5-inch Prince William forces fake Kate to stand on a crate during their scenes; their meager budget can”t afford wigs, so Will sports a full head of hair; and a Los Angeles hotel is supposed to fill in for Windsor Castle. None of this will stop us from watching, of course, but hopefully the actual wedding has a dose of glamour.

In case this wasn”t obvious, Justin Timberlake did break Jessica Biel’s heart. Supposedly, he was miserable for two years”years!”before dumping the actress earlier this month. “You”d be surprised at how soon the love was lost on this one,” says a “pal” of the star. And yet, they stuck it out? Timberlake never admitted any affairs”Mila Kunis and Olivia Munn are just two of the names thrown about”and he’s probably already making the rounds looking for his next leading lady.

Kids, they just don”t know how to change their passwords. New nude photos of Vanessa Hudgens found their way to the Internet this week, and now the FBI is getting involved. A notorious hacker is likely to blame for hacking her accounts, and is said to have targeted Scarlett Johansson, Ali Larter, and Miley Cyrus.  Young stars fight back against hacker bullies”that’s a thin enough plot to make a Disney movie. 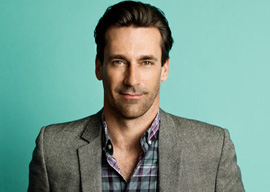 Jon Hamm‘s taking it easy during the Mad Men hiatus. He turned the big 4-0 last week and celebrated at the Top of the Standard with SNL‘s Lorne Michaels, Kirsten Wiig, and Sarah Silverman. Surprisingly, Hamm hit his whiskey limit at 1am and had to be helped out by his friends. Even Don Draper can have an off day.