Keeping Up With the Diamonds 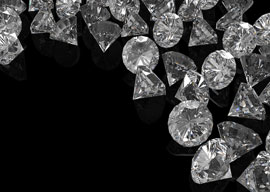 I love them, you love them. Who doesn”t love them?

Diamonds are shiny, they are pretty, and they are a hot commodity.

They are also a refuge for money.

This year the “Pink Star” diamond sold in Geneva for $83 million, breaking the $46-million record from 2010. A flawless white diamond sold in Hong Kong for $30.6 million.

“Diamonds are badges in the hierarchy of monied kin and their spectacle of richesse.”

But what are diamonds? To begin with, they are a form of carbon. They take at least a billion years to develop at a very high temperature in the Earth’s mantle, brought to the surface by magma. Black diamonds come from space and can be found in South America and Africa. Both kinds are made of solid stuff. The word “diamond” comes from the Greek for “unbreakable. “

Humans discovered diamonds along rivers in India more than 3,000 years ago. They were used for engraving and to decorate religious icons. Ever since they have been coveted gifts, adornments, and tools. Today 80% of mined diamonds are for industrial use.

De Beers held its first rough diamond sale in Botswana and relocated the De Beers sorting and sales facility from London to Gaborone in an effort to legitimize the partnership between the former cartel and Botswana.

Since the De Beers monopoly ended in 2001 the market has changed. Russia, Australia, and Canada have made significant diamond discoveries, and investment-grade diamonds will likely be available on the NASDAQ stock exchange in 2014.

The diamond’s star would appear to be on the rise.