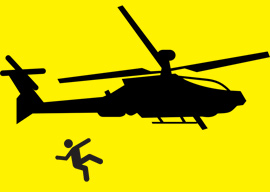 Serbian death squads, including a paramilitary unit called the Scorpions, took out an estimated 10,000 Bosnian males and assorted refugees in July 1995 alone. But death squads are not a strictly rightist phenomenon”Idi Amin had his death squads, as did “Papa Doc” Duvalier and Pol Pot. Death squads exist wherever the powers that be want to kill people unencumbered by the petty inconveniences of the law.

Criminal gangs in America tend to be ethnically homogenous, and given the history of street gangs in America, it’s not unreasonable to view many of them as upstart ethnic self-defense leagues. But despite all you hear about skinheads and Klansmen and neo-Nazis running rampant in America, white gangs only comprise about 11% of the total membership in the USA. In other words, whites are statistically underrepresented by a factor of almost six. Compare this to Hispanic gang members, who comprise nearly half of the total even though Hispanics are only about 15% of the population. Blacks account for about 35% of total gang membership”an overrepresentation of nearly 300%.

As Pat Buchanan, Peter Brimelow, and many others have noted, this country seems to be teetering dangerously close to a civil war. But since much of the left shows no signs of calming down and seems to truly desire a violent civil war, one glaring statistic does not bode well for them”gun ownership. Roughly twice as many Republicans say they own guns compared to Democrats, and lawdy knows a healthy quotient of those Trump-supporting “Nazis” own several guns.

For eight years”with all the flash mobs and Occupy protests and wide-scale looting and arson whenever a black criminal who fought with a cop wound up getting shot”the left threw Victory Riots. Now they seem hell-bent on at least four years of Defeat Riots.

It’s Newton’s Third Law. Every action has an equal and opposite reaction.

But somehow I doubt they”d be nearly so brazen if they feared that down every street across America, their violent shenanigans might be met by self-styled Right Wing Death Squads who are willing to fight back. Ronald Reagan was clearly not yet senile back when he insisted that the only way to achieve peace is through strength.