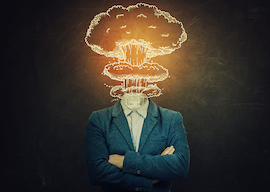 It was July 17, 1984, and James Huberty wasn’t feeling well. Something wasn’t right “upstairs.” The recently fired security guard in San Ysidro, Calif., (a border district in San Diego) was having dark thoughts. Violent thoughts. So Huberty, married with two young daughters, called a local mental-health crisis center. He told them he was in trouble—deep trouble—and he needed help before it was too late.

The phone operator took his info and promised a speedy call back. It never came. According to his wife, Huberty waited patiently by the phone for the rest of the day, hoping for the call. When he realized it wasn’t coming, he quietly told her, “Well, society had its chance.” The next day, he took his family to a local McDonald’s, then to the zoo, and then—upon returning home—he grabbed a collection of firearms from his private arsenal and headed back, alone, to the McDonald’s where he’d eaten that morning. He proceeded to gun down 21 people (including an 8-month-old baby) before being felled by a police sniper’s bullet.

Charles Whitman, the UT Austin tower gunman who killed seventeen people in 1966, also knew he was fighting a losing battle against mental illness. In a letter he penned before heading to the site of his rampage, he urged scientists to study his brain, to prevent future mass shootings.

For a spree killer, you gotta give it up for the guy’s optimism. But his faith in medical science was misplaced. One after the other, from Virginia Tech’s Seung-Hui Cho to Isla Vista’s Elliot Rodger to Umpqua Community College’s Chris Mercer to self-styled “Joker” James Holmes to Florida’s famed Nikolas Cruz, the U.S. has seen case after case of mass shooters with a history of mental illness. It’s one of the few things that most (not all, but most) of these spree killers have in common. And now we have a new one. Last week, Ian Long, a mentally disturbed ex-Marine in the upscale Southern California community of Thousand Oaks, shot up a country & western bar, killing eleven. And in the postmortem, we find the usual missed opportunities. In every recent case of a mentally ill mass shooter, there’s been at least one blown opportunity, one instance in which law enforcement missed a chance to intervene, often because cops’ hands are tied by laws that make intervention exceptionally difficult. In the case of Long, every time he went off his meds and had a violent outburst, cops were called, but no action was taken because Long didn’t meet the legal standard of presenting an immediate danger to himself or others.

It’s worth quoting a tweet from Ann Coulter regarding Long and the fact that, in his previous run-ins with the police, officers “decided he was not qualified to be committed involuntarily”: “Maybe if CA spent less time attending to the needs & comfort of illegals, legislature could fix laws on the mentally ill.”

“The obvious question is, why the obfuscation? Why this desire to redirect the focus away from mental illness?”

Ann is, of course, quite correct, but the problem goes deeper than time and money. And although the specter of mentally ill mass shooters is not confined to one state, California can be considered ground zero for what is now a national problem.

And it all started with “bipartisanship.”

In 1967, California State Assemblyman Frank Lanterman, a Republican, partnered with California State Senators Nicholas Petris and Alan Short, both Democrats, to effectively empty the state’s mental hospitals. It’s a common belief that this coalition was one of convenience, that the two Democrats were getting what they wanted—freedom for our misunderstood disabled brothers, man, whose rights are being violated by involuntary institutionalization—and the Republican was getting what he wanted—think of how much money the state will save by not having to care for these costly parasites! However, nothing could be further from the truth. Republican Lanterman was a lifelong busybody and proto-SJW who was no less interested in “freedom for our oppressed brothers, man” than were his two Democrat colleagues. Yes, when then governor Ronald Reagan signed the Lanterman-Petris-Short Act (LPS), for him, the economic upside was a factor. But the three bipartisan stooges were acting for the exact same ideological reasons. To be fair, LPS was inevitable. The ACLU was winning case after case in favor of deinstitutionalization. By ’67, a law like LPS was practically court-mandated, and soon other states followed suit, always with LPS as the legislative model, because it was the first.

LPS dumped thousands of people with severe mental illness onto the streets, where police became powerless to hold them for longer than the “5150” 72-hour period, and only then if they were determined to be an immediate threat. And doctors became powerless to force those people to take medicine or seek outpatient treatment. The mentally ill were told, “You’re on your own,” and the rest of society was told, “Live with it, suckers!”

In his twilight years, Frank Lanterman renounced his landmark law, and argued for it to be changed. Too late, buddy! Since ’67, the ACLU and the mental-health advocacy industry have fought any attempts to make it easier for cities to deal with schizos and psychotics, the kind who haven’t harmed anyone yet but who present all the warning signs of being potentially dangerous.

The day after the massacre of 27 children and teachers in Newtown, Conn., by Adam Lanza, a 20-year-old mentally ill freak with a history of psychotic episodes, I was the first commentator to point out that mere months before Lanza’s rampage, lawmakers in Connecticut had proposed a bill to address the problem of severely mentally ill people who have yet to do enough harm to be held on a 5150. In the words of the Connecticut Mirror, the new law would have “allowed for people with psychiatric disabilities to be medicated, even if they object, while they’re in the community, if remaining unmedicated would leave them or others at risk of harm.”

The ACLU and mental-health advocates torpedoed the bill, because it would have “severely curtailed the privacy rights and liberty interests of individuals with severe disabilities.” As Adam Lanza was gunning down small children, I’m sure his victims’ final thoughts were not of mommy or daddy, but of how grateful they were that the ACLU protected the killer’s “privacy rights.”

Lobbying against the bill, Daniela Giordano, public policy director for the National Alliance on Mental Illness (Connecticut), told the Mirror, “Would you do that with somebody who refused to take their diabetes or their heart medication? Are you going to mandate that? No, you wouldn’t. There would be a huge civil liberties outcry.” And that’s why we can’t have an intelligent debate on this issue. The ACLU’s privacy and liberty concerns are not unfounded. Such things must always be taken into account. The problem is that ideologues like Giordano make idiotic analogies that make no sense and confuse the issue. If a diabetic fails to take his insulin, he’s putting nobody at risk but himself. But a psychotic who fails to get treatment becomes a threat to others—to you, to me, to children in a school, to patrons in a bar. The mental-health advocacy extremists refuse to acknowledge that distinction, because they refuse to admit that the people they represent can be dangerous. Not are dangerous, but can be. The fanatics won’t cede even that much to reality, experience, and common sense.

The minute anyone starts talking about the mental-illness aspect of mass shootings, the Giordanos and their ilk trot out the same tired propaganda points. Just Google “mental illness” and “more likely to be.” Google that sentence fragment. You’ll get over 300,000 news stories with slight variations of the exact same sentence: “People with mental illness are more likely to be the victims of violent crime than the perpetrators.” Same damn sentence, repeated over and over again, always in the immediate aftermath of a mass shooting committed by a person with mental illness (wotta coincidence!).

One of the most vocal proponents of this cookie-cutter argument is Vox’s favorite autist, Dylan Matthews (Matthews writes a lot about his autism, so I’m using the term literally, not in the 4Chan sense). In a piece titled “Stop Blaming Mental Illness for Mass Shootings,” Matthews (a.k.a. the guy in high school even I would have wedgied) trots out cliché after cliché to make us believe that a crisis involving mental illness totally doesn’t involve mental illness. But like many autistics, Matthews can memorize and repeat, but he can’t reason. The “more likely to be victims of violent crime than perpetrators” propaganda point is bullshit for the simple reason that the same argument goes for everyone. No matter how you group humans—by race, ethnicity, nationality, religion, gender, or sexual preference—we are all more likely to be victims of violent crime than perpetrators. Men, for example, commit more violent crimes per year than women, but at the same time, men are also more likely than women to be the victim of violent crime. So the mentally ill are just like everyone else—more likely to be victim than victimizer. But that’s beside the point when looking at the disproportionate presence of mental illness among spree killers. The “more likely” argument is pure misdirection.

Matthews links to several paywalled studies (bad show, autist) to further his thesis that mental illness is irrelevant to mass shootings. But some of those studies purposely muddy the waters by redefining mental illness so that it magically doesn’t apply to most shooters (as in, classifying as mentally ill only killers who, prior to their spree, had been officially committed to a mental institution).

The obvious question is, why the obfuscation? Why this desire to redirect the focus away from mental illness? In Dylan Matthews we see where the two ideological lines intersect: the disabled activist fighting for the rights of his “people,” and the leftist extremist who wants to scuttle the Second Amendment. Focusing on mental illness takes the focus off the fight for gun control, and people like Matthews cannot allow that to happen.

For mental-health advocates like the ones who killed the Connecticut outpatient bill, it’s all about doing good PR for their “victim group.” And for political leftists, it’s all about trying to take away the guns.

There is no one solution to the problem of mass shooters, and there have indeed been spree killers with no known history of mental illness. But enough of them have had such a history, enough of them have lived the “cops are called for psychotic episode, cops show up, cops’ hands are tied by the law, cops leave” script, that it’s patently irresponsible to ignore or downplay the importance of mental illness in these crimes.

But don’t count on leftists and their media lackeys to do that. They want the guns gone, and they’re going to push for that, no matter how many other important avenues of discussion they have to ignore, and no matter how many more bodies pile up.